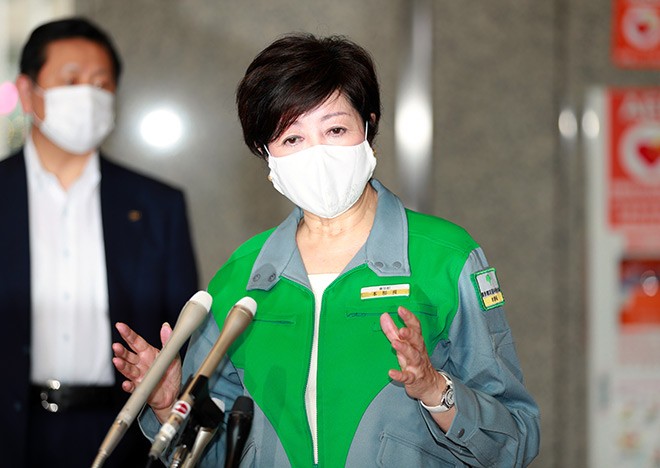 Tokyo Governor Yuriko Koike responds to questions from reporters at the metropolitan government building on July 6, the day after she won re-election. (Rei Kishitsu)

Even after voters gave Yuriko Koike a second term as Tokyo governor on July 5 in a landslide, she had no time for a victory lap.

Koike is facing an Olympic-size challenge in controlling the spread of the new coronavirus, which is spiking again in the capital.

The fate of the Tokyo Olympics and Paralympics, which were delayed to next summer due to the pandemic, could hang in the balance.

“The pressing issue is how to cope with the coronavirus pandemic, and we are at a critical juncture in terms of preparing for a second wave of infections,” Koike, 67, said during a live streaming after 8 p.m., when the polls closed. “I will work hard to fully grapple with the coronavirus.”

Ironically, the outbreak of infections in Japan thrust Tokyo's first female governor into the national spotlight, boosting her chances for re-election.

She cautioned against the spread of the coronavirus through strong words, such as “lockdown” and “infection explosion,” when many cases were confirmed in the capital in late March.

Koike pressed Prime Minister Shinzo Abe to issue a state of emergency over the coronavirus for Tokyo.

Abe was initially cautious about issuing an emergency declaration, given the serious consequences for the metropolis with a population of 14 million, which is the nation's political and economic center.

Koike stressed the need for businesses to shut down promptly to contain the spread. She promised to provide an economic relief package if business owners cooperated with the request, backed by Tokyo’s financial muscle.

But the central government opposed asking businesses to close at an early stage of the outbreaks.

In the end, the central government approved almost all the metropolitan government’s proposal for which industries should be shut down.

Still, Koike's handling of the health crisis attracted its fair share of critics -- particularly after the state of emergency was lifted for Tokyo on May 25.

The metropolitan government presented a three-stage road map toward easing of restrictions on business activities on May 15.

It moved on to Phase 2 on June 1, allowing cram schools, movie theaters and sports clubs to reopen.

But the following day, newly confirmed infections surged to 34 in Tokyo, beyond the threshold of the daily average of less than 20 over a week, one of three criteria for easing business restrictions.

The count of 34 led the metropolitan government to issue a special alert to call on Tokyo residents to remain vigilant by illuminating the Rainbow Bridge in red.

But Koike announced lifting the alert on June 11, a week before the official campaigning for the gubernatorial election kicked off.

“We are prepared to start a new life,” she said.

On June 12, she announced her candidacy for a second four-year term.

A flurry of messages critical of the governor were posted on her official Twitter account, accusing her of cashing in on the COVID-19 pandemic to steer the campaign in her favor.

Tokyo was by far the most affluent, compared with other prefectural governments. It was the first of Japan’s 47 prefectures to promise an economic relief package to businesses that cooperated with the voluntary closures to stem the spread of the outbreaks.

But about 90 percent of the sum is now gone due to the financial assistance payouts.

This month, newly confirmed cases topped 100 for the fourth straight day in Tokyo, an alarming sign that infections are on the rise and continuing.

Unless the curve flattens in the coming months, Tokyo would be unable to host the rescheduled Olympics and Paralympics next summer.

How the capital proceeds with trying to balance between containing the disease and maintaining a thriving economy will be closely watched by other local leaders.

“We will first press ahead with preventing outbreaks,” Koike vowed July 5. “That will enable us to host the Olympics and Paralympics.”

The day after she won re-election, Koike said she felt the weight of responsibility as governor with 3.66 million votes cast for her, the second most in the history of the Tokyo gubernatorial election.

“I garnered 3.66 million votes, more than I had expected,” she told reporters on the morning of July 6. “Drawing strength from their support, I am determined to press ahead with measures focusing on anti-coronavirus measures, the livelihoods, lives and health of Tokyo residents, as well as a growth strategy for Tokyo, which is the heart of the Japanese economy.”