Muddy water in the Kumagawa river overflows the riverbanks in Hitoyoshi, Kumamoto Prefecture, on the morning of July 4, swamping a sprawling area nearby. (Provided by Ryuichi Yotsumoto) 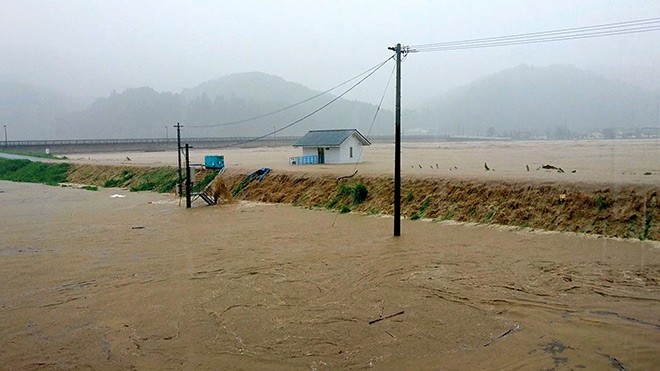 Floodwaters of the Kumagawa river overflow the banks and inundate nearby land on July 4. (Provided by Ryuichi Yotsumoto)

HITOYOSHI, Kumamoto Prefecture--A man who shot a video of the swollen Kumagawa river right before floodwaters ripped its banks said his feet were shaking with fear when he saw what was unfolding before him.

The video Ryuichi Yotsumoto captured shows the water quickly rising after the torrential rains on July 4 that caused the riverbanks to burst, covering expansive areas with muddy water.

According to the land ministry, the banks of the Kumagawa river tore away at one location while the river overflowed at 11 other sites.

The banks burst about 4 kilometers to the west of JR Hitoyoshi Station.

Yotsumoto, 50, who lived in the neighborhood, rushed to the office of a rafting company located near the site after the company’s president, an acquaintance of his, called him around 7 a.m. on July 4 about the banks' imminent failure.

When he tied boats to pillars with ropes to prevent them from being washed away, he heard floodwaters beating against the banks. Yotsumoto began filming the river around 7:18 a.m.

At that time, the water level in the Kumagawa river was already as high as the banks, with muddy water overflowing the banks.

The gushing steadily gathered strength and the water flowed over like a waterfall.

“We should flee from here,” he told the company president. “Our lives are in danger.”

On their way to safety to an elementary school near the mountain, they heard the loud sound of something breaking.

Two hours later, when Yotsumoto looked down below to the area where the office was located, it was covered under a sea of mud.

When he returned to the office after the floodwaters receded, there were signs that the water reached a height of about 2 meters above the floor.

“My experiences during the flooding reminded me of the tsunami spawned by the Great East Japan Earthquake” of 2011, he said. “I could not have escaped the disaster if I had waited a little longer.”