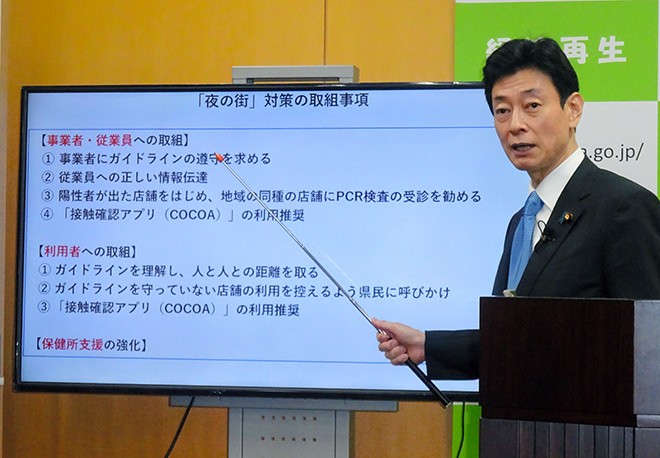 Japan plans to further ease restrictions on July 10 on holding events nationwide as scheduled despite a surge of new COVID-19 cases in Tokyo, a state minister said on July 5.

After lifting its state of emergency for all prefectures on May 25, the central government decided to relax restrictions on hosting events and other economic and social activities in stages by assessing the spread of infections in Japan about every three weeks.

The government has been planning to move to Step 3 of its four-stage road map to resume such activities on July 10.

Organizers of professional sports activities and other events are currently allowed to hold events without spectators, but they can stage them at half capacity, or with up to 5,000 people, at Step 3.

The professional baseball and soccer leagues said on July 6 they will begin allowing fans in on July 10 as scheduled.

“We heard from experts that the infection situation in Tokyo and nationwide does not indicate a large-scale outbreak is occurring and is likely to hit the country,” said Yasutoshi Nishimura, the state minister of economic revitalization who is also in charge of novel coronavirus measures, during a talk show on Japan Broadcasting Corp. (NHK) on July 5. “There’s no change in our plan (to move to Step 3).”

Asked about the recent daily number of new cases in the capital continuing to exceed 100, Nishimura reiterated, “We’re not considering reissuing a state of emergency at this point,” citing sufficient capacity to cope with patients in Tokyo's health care system.

Nishimura held a video conference the same day with governors of neighboring Saitama, Chiba and Kanagawa prefectures, where new COVID-19 cases have been rising.

The participants agreed to cooperate in stepping up measures against infections at host and hostess bars and other similar establishments where many cases have been reported.

“We shouldn’t be so optimistic since Saitama Prefecture's medical system has only a limited capacity,” Saitama Governor Motohiro Ono told reporters after the video conference. “I’ll ask the central government to issue a fresh state of emergency when we see a surge in infections.”

(This article was written by Dai Nagata and Yoshitaka Unezawa.)