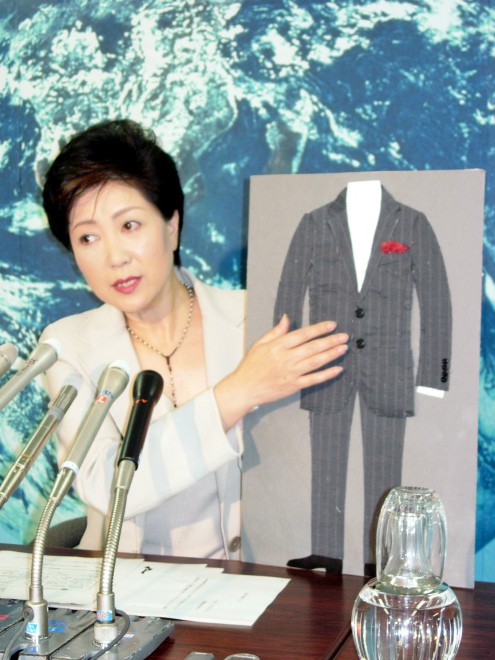 Tokyo Governor Yuriko Koike was the environment minister in the summer of 2005 when the name of a campaign she spearheaded became a household expression.

Called "Kuuru Bizu" (Cool Biz), the purpose of this drive was to get Japanese businessmen to shed their jackets and ties during the hot and humid summer months.

An earlier drive of a similar intent, advocated in the late 1970s by the Cabinet of Prime Minister Masayoshi Ohira, featured what was referred to as the "sho-ene rukku" (energy-saving look)--essentially, short-sleeve jackets for men.

The style was definitely offbeat and unflattering, and it was no surprise that the campaign effectively died even before it really got off the ground.

Kuuru Bizu is only one of the catchy taglines Koike has consistently employed to push her pet policies, even as the governor of Tokyo.

Some are katakana words (expressions borrowed from foreign languages), and others contain numbers.

But many, I suspect, will prove ephemeral like "sho-ene rukku."

A pledge Koike made during her first term as Tokyo governor was "nanatsu no zero" (seven zeroes)--implying the elimination of seven problems plaguing the capital, including nursery schools being in dire shortage, overcrowded commuter trains and roadside power transmission poles.

But she has hardly attained any of these seven goals.

Her slogan of "Tsukiji wo shoku no teema-paaku ni" (Turning the former Tsukiji fish market into a theme park of food culture) seems to have been all but forgotten.

And the "Tokyo Alert" she issued to fight the COVID-19 pandemic? Nobody knows exactly what the conditions were that warranted the issuance of this alert, and whether it has had any positive effect.

Re-elected for her second term on July 5, Koike stressed the need to "establish a Tokyo version of the Centers for Disease Control and Prevention (CDC)," but she also said, "I don't intend to build a new facility. ..."

That made me immediately suspect that this plan, too, will eventually fall by the wayside. Or am I being too cynical?

"Politicians' words have become lightweight" is an often-heard criticism. In Koike's case, I am certain her words make politics sound more interesting or exciting.

But if they are going to simply float around and eventually disappear without ever being fleshed out, I must say they are too insubstantial to be even called "light."