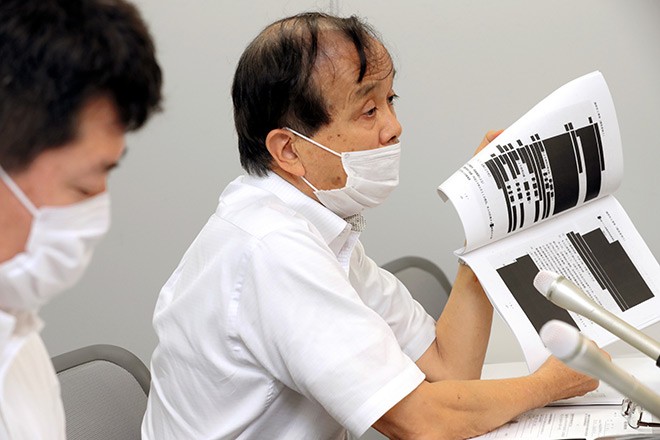 Tadashi Matsumaru, right, a lawyer with the National Defense Counsel for Victims of Karsohi, speaks at a news conference in Osaka on July 6 about an information disclosure request from the widow of a Finance Ministry employee who committed suicide. (Masaru Komiyaji)

OSAKA--The widow of a Finance Ministry employee who committed suicide after being forced to falsify documents over a shady land deal sued the government for the immediate disclosure of records related to her husband’s death.

In the lawsuit filed at the Osaka District Court on July 6, the plaintiff, Masako Akagi, argued that the nearly one-year delay by the ministry’s Kinki Local Finance Bureau to decide whether to release the relevant records is illegal.

“Why did my husband develop depression? The Kinki Local Finance Bureau should promptly disclose the documents,” Akagi said in a statement read by her lawyers at a news conference in Osaka the same day.

Her legal action came after the Osaka District Court on June 25, in a separate lawsuit filed by a law professor, ruled that the ministry’s withholding of official records related to the land sale was intentional and “extremely vicious.”

Akagi’s lawsuit could shed fresh light on why the government has been so reluctant to release information about the bureau’s sale of state-owned land to Moritomo Gakuen, an Osaka-based private school operator linked to Prime Minister Shinzo Abe’s wife, Akie.

Moritomo Gakuen received a steep discount for the land in Osaka Prefecture.

Akagi’s husband, Toshio, worked for the bureau, which was directly involved in negotiations with Moritomo Gakuen over the land.

He developed depression after he was forced to help falsify public documents concerning the sale of the land. He killed himself in March 2018 at the age of 54.

The plaintiff is hoping to gain access not only to records about her husband’s working hours but also the results of hearings of ministry employees that are believed to have taken place after his death. She believes the information could explain the circumstances that led to Toshio’s suicide.

The bureau recognized his death as an accident in the line of duty in February 2019.

In September, the widow asked the National Personnel Authority, a government agency that jointly examined with the bureau whether Toshio’s death was work-related, to disclose ministry documents written before and after his death.

Two months later, the National Personnel Authority notified her of the decision to disclose them. In December, Akagi received about 70 pages of documents, but most of the content was blacked out.

The widow made a similar information disclosure request with the Kinki Local Finance Bureau in April.

But the bureau released only 10 pages in May, saying it would delay a decision on whether to disclose the remaining records until May 2021.

The bureau said it had been extremely busy because of the state of emergency declared by the government over the new coronavirus pandemic.

The law on protecting personal information held by administrative organs contains a provision that says decisions on whether to release documents should be made, in principle, within 30 days from the date of the disclosure request.

But it also states that the decision can be postponed “within an adequate time frame” if the possible disclosure involves an “extremely large volume” of documents and preparing for the release of such information would significantly disrupt officials’ regular work.

The plaintiff’s side argues that the requested information cannot be described as “extremely large” because many of the documents must have the same content as that of the 70 pages already released by the National Personnel Authority.

Her lawyers also noted that the state of emergency over the coronavirus was lifted for the entire country on May 25.

They said the bureau has illegally abused its discretionary power by citing an increased workload for delaying the decision by up to a year.

The delay, about six times the time it took for the National Personnel Authority to release the information, is beyond “within an adequate time frame,” according to the lawyers.

The Finance Ministry declined to comment on the lawsuit, saying it has yet to receive the court papers.

In a separate court battle at the Osaka District Court, Akagi is seeking 112 million yen ($1.04 million) in compensation for her husband’s suicide from the government and Nobuhisa Sagawa, who was director-general of the ministry’s Financial Bureau, which oversaw the sale of state assets.

Tadashi Matsumaru, a lawyer with the National Defense Counsel for Victims of Karoshi, a network of lawyers addressing the issue of death from overwork, called the bureau’s one-year postponement “unusual.”

He noted that information disclosure within 60 days is generally the norm for karoshi cases.

“The delay suggests that some consideration has been given,” he said.

Yukiko Miki, head of the nonprofit organization Access-Info Clearing House, which examines information disclosure by public entities from the viewpoint of citizens’ right to know, also accused the bureau of dragging its feet.

“One year is too long, considering the amount of work needed to prepare for the release of records on a single particular employee,” she said. “The bureau should decide swiftly because taking too much time will work to the detriment of information disclosure requester.”

(This article was written by Takashi Endo and Yuto Yoneda.)