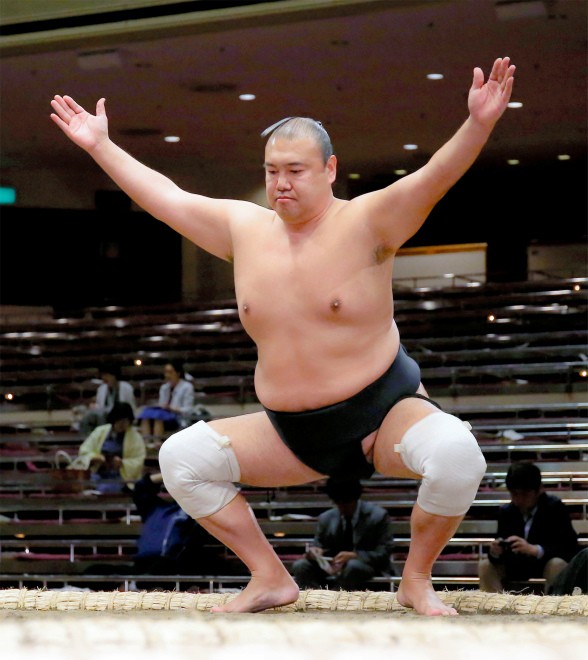 Hanakaze enters the dohyo ring on May 13, 2019. (Provided by Nikkan Sports)

You're squatting in the dohyo sumo ring staring down a younger opponent, who is seconds from hurtling his body resembling a mountain into yours. You're 50 years old, by the way.

Welcome to the world of Hanakaze, who having reached the landmark age in May, is the nation's oldest active sumo wrestler, and the only one still competing since the Showa Era (1926-1989).

The current record for the all-time oldest rikishi was set by sekiwake Miyagino Nishikinosuke, who retired from sumo in 1796 at age 52. It remains to be seen whether that record will be broken during the current Reiwa Era.

Tokyo native Hanakaze, who hit the half century mark May 28, made his professional sumo debut at the 1986 spring tournament.

The wrestler, whose real name is Daisaku Yamaguchi, is a member of the Tatsunami stable in the lower "jonidan" division, and the sole rikishi to have fought bouts in the Showa, Heisei (1989-2019) and current Reiwa (2019-present) eras.

Hanakaze, who has 658 wins against 743 losses, has never risen higher than the third-lowest "sandanme" division. Wrestlers in the division only compete in seven bouts, while "sekitori" wrestlers in the top two divisions fight on all 15 days of each tournament.

Still, he ranks sixth among all rikishi, nearly 700 in number, in terms of number of wins. Yokozuna Hakuho remains far ahead of the pack with 1,160 victories.

Hanakaze debuted in the ring a year earlier than the current stablemaster, who is now 51, fighting his first bout when the stable was run by former sekiwake Annenyama, later known as Haguroyama.

Hanakaze also ranks first by far in terms of the number of sumo tournaments fought in, having competed in 205.

But injuries in recent years have hurt his ability to prepare sufficiently for bouts. Last year, Hanakaze competed in the lowest "jonokuchi" division for the first time in 31 years.

Hanakaze may hold the current title for longest-serving wrestler, but an growing number of rikishi are also enjoying long careers.

The oldest members in the top makuuchi division are Kotoshogiku and Shohozan, both 36. Thirteen rikishi in their 40s competed in the third-highest makushita and lower divisions as of January this year.

There is no retirement age for sumo wrestlers, who in principle can't be coerced to quit and are instead given great leeway to decide when to exit the sport.

"I was lucky, but some can't bring themselves to retire because they can't find what to do next," said one ex-rikishi who retired when he was in his 40s and found a job at a restaurant.

"It gets harder as you grow older, and your decision is also affected by economic ups and downs."

Tetsuhiro Matsuda, 59, who wrestled at sandanme-level under the name Ichinoya, was the oldest rikishi since the Showa Era until Hanakaze surpassed him.

"I had pursued an ideal of sumo, thinking that there must be a way to win without depending on age, muscular strength and reflexes," he said. "I just couldn't put the concept into practice with my own body."

Looking at sumo purely as a sport, it isn't healthy to have many older wrestlers still fighting when they stand no chance for promotion, Matsuda said.

But he argued professional sumo needs them, and said the older wrestlers are essential for hosting professional tournaments, during which as many as over a hundred bouts are fought by wrestlers from the lowest jonokuchi through top makuuchi divisions each day.

Besides, wrestlers each have their own roles at their stables, where they live in a group, including performing chores and coaching younger disciples.

Hanakaze has long been one of the wrestlers in charge of preparing "chanko-nabe" hot pot at his stable, the traditional meal sumo wrestlers eat to bulk up.

"In the sumo community, we don't outsource our chores, we do everything ourselves," Matsuda said.

"Everyone, including those who make the dohyo and handle the management, is supporting sumo tournaments," Matsuda said. "It's OK if there are unproductive roles. I think it shows how inclusive and broad-minded the sumo community is to accept them."

EDITORIAL: Living with risk of eruptions and finding ways for people to be safe

‘Osumitsuki’ mentality thrives in the corridors of power