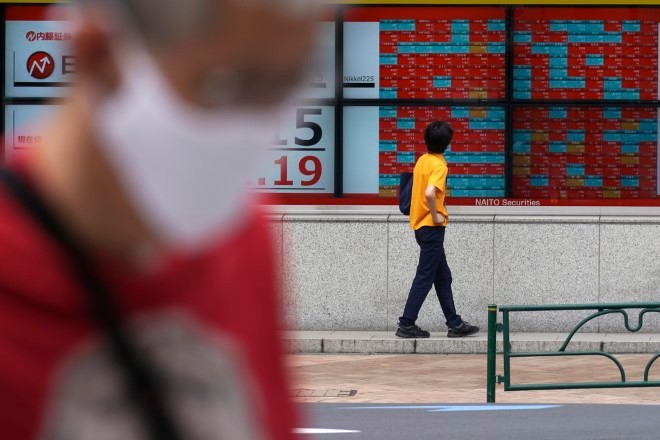 A man looks at an electronic stock board showing Japan’s Nikkei 225 index at a securities firm in Tokyo on July 3. (AP file photo)

NEW YORK--Asian stocks were set for a mixed open on Wednesday, as an increase in new coronavirus cases in some parts of the world cast doubts over the economic recovery, leading some investors to cash in on recent gains ahead of earnings season.

U.S. stocks fell on Tuesday, halting a five-day winning streak by the benchmark S&P 500 index, its longest this year, which had been driven by better-than-expected economic data.

Following the recent rally, the declines looked like a consolidation, with the markets largely in “wait and see mode” ahead of the upcoming earnings session, said NAB economist Tapas Strickland.

“It will be important to watch the number of U.S. deaths in coming weeks and whether greater questions will be asked about the extent of necessary restrictions,” he added.

The surge has made business owners “nervous again,” Atlanta Federal Reserve Bank President Raphael Bostic said on Tuesday. “There is a real sense this might go on longer than we have planned for,” he said.

Coronavirus cases were also on the rise in the Australian state of Victoria, which led to lockdown measures being reimposed in Melbourne, the country’s second-biggest city.

“The second wave of infection will see Victorian economic activity fall sharply and it will continue to lag the rest of Australia,” said NAB economist Kaixin Owyong.

Victoria makes up around a quarter of Australian economic activity, she said.

Concern over the rise in new coronavirus cases helped lift safe-haven assets, including the U.S. dollar, which was 0.15 percent higher at 96.889, against a basket of currencies.