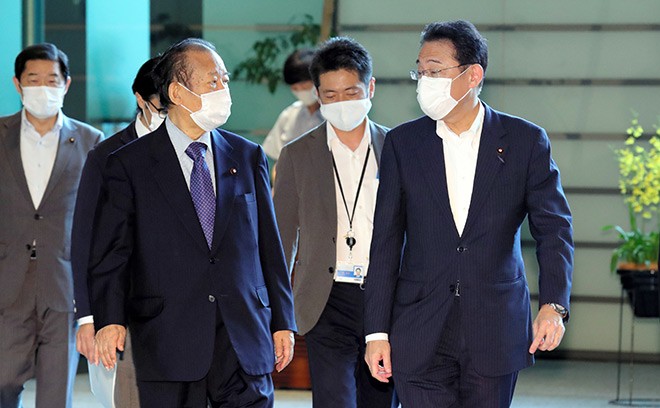 Members of a foreign affairs policy group who crafted the draft resolution had earlier called on the Japanese government to cancel plans for a state visit by Chinese President Xi Jinping.

But in response to objections from top party officials, the approved resolution replaced the phrase “we request Xi’s state visit to Japan be canceled” with the following weaker expression: “As the LDP’s Foreign Affairs Division and Foreign Affairs Research Commission, we have no choice but to request the cancellation.”

Members of the division and commission spent much of their July 6 joint meeting arguing over how to phrase the request.

Many of them, including conservative lawmakers who are critical of China, supported the use of stronger language aimed at urging the Japanese government to cancel Xi’s trip to Japan, multiple attendees said.

But lawmakers belonging to a political faction led by Toshihiro Nikai, the party’s secretary-general who has close ties to China, argued strongly against it.

Yasuhide Nakayama, who heads the division, later discussed the matter with Nikai and Fumio Kishida, chairman of the LDP's Policy Research Council.

They agreed to use a weaker expression and emphasize the cancellation request comes from the division and council, not the entire party.

They also made sure the resolution includes a statement, “We urge the (Japanese government) to make a strong approach to China to build a friendly relationship for a new era.”

Nikai said at a news conference: “Many people have worked so hard to make the current level of (good) Japan-China relations possible. Foreign diplomacy is a two-way thing. We should be cautious in the extreme before taking any action.”

Nikai kept Nakayama and other members in check by saying, “I don’t know if they are the heads of the division or whatever, but such matters should not be decided lightly.”