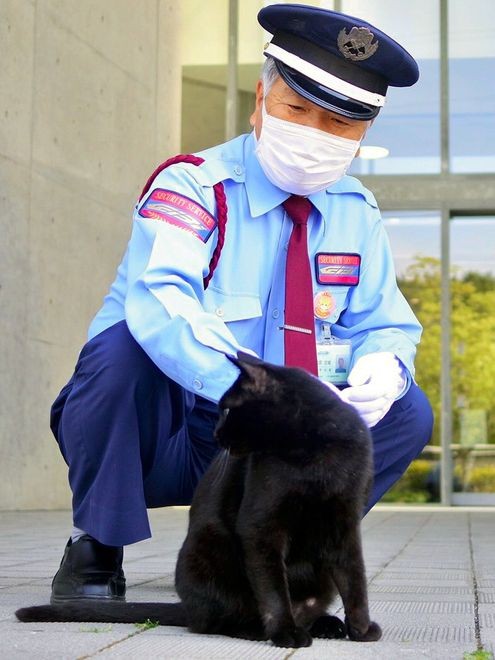 Ken-chan and Umayahara meet for the first time in about two months on May 24. Umayahara looks tenderly at the cat, which appears rather unfriendly. (From the Twitter account of Onomichi City Museum of Art)

ONOMICHI, Hiroshima Prefecture--Social media users reveled at a photo that showed a cat and a local museum security guard once again at odds, after about a two-month pause in their rivalry.

They had not seen each other since March 14, due partly to the museum’s temporary closure from mid-April to early May because of the COVID-19 pandemic. Now they are both back to punching the clock.

“A photo of the two for the first time in a while!” tweeted a staff member of the museum on its official account on May 24. “We’ve been waiting for you, meow!”

A photo attached to the message showed Ken-chan lying on the floor in front of the museum and Umayahara in a face mask looking at the cat.

“This is what I’ve been waiting for!” one said.

“The way he looks at the cat is always tender,” said another.

The post earned more than 8,000 likes just about a week after being posted.

Ken-chan, a pet living at a nearby restaurant, first caught the attention of social media users in March 2017 after the Twitter account posted a photo of Umayahara blocking the cat from entering the museum, which was holding a “Nekomamire” (Cats all over) exhibition at that time.

The museum in Onomichi, known as a town of cats, has hosted many exhibitions featuring felines.

Tweets about “battles” between the two frequently generate social media buzz. Ken-chan only attempts to get into the museum when Umayahara is on duty.

Umayahara comes to the museum only during special exhibitions held four times a year.

“I guess the cat wants to play with Umayahara-san, a familiar face, rather than wanting to actually enter the building,” said a museum staff member.

As if to confirm that speculation, Ken-chan crouched down to the floor after passing through the first of the two museum doors on May 20.

“Umayahara-san wasn’t on duty that day,” said the staff member. “I think the cat gave up going any further because it couldn’t find him.”

When the two reunited for the first time in about two months, Umayahara wore a face mask. Ken-chan had never seen him in a mask before, but that did not scare the cat away. It cuddled up to him, as it always does.

“Umayahara-san is scheduled to come to the museum only on weekends, when it is expected to be crowded,” said the staff member. “We’ll let you know if there are any developments between them on our Twitter account.”