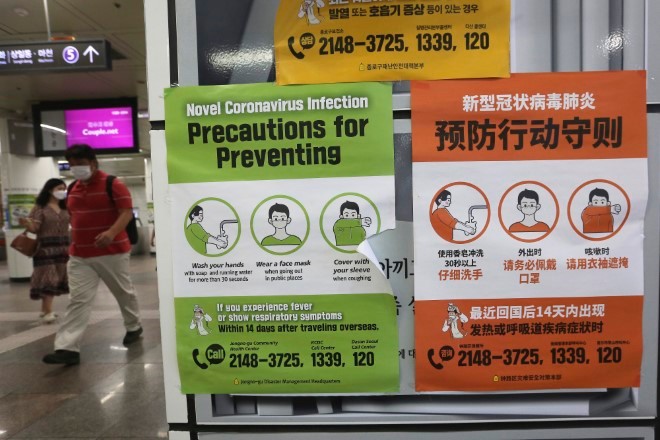 People wearing face masks pass by posters about precautions against the new coronavirus at a subway station in Seoul on July 8. (AP Photo)

SEOUL--Three hundred drones took to the evening sky over the Han River in South Korea to dispense coronavirus prevention advice through a synchronized light display featuring images of hand-washing and social distancing.

A horde of pinpoint lights lifted into the air in military-like formation on Saturday before rearranging themselves to form the image of a white face mask, with red circles symbolizing the new virus that has led to almost 300 deaths in the country.

The 10-minute display, organized by the Ministry of Land, Infrastructure and Transport, also showed images of medical workers in protective suits and messages of support including “#ThanksToChallenge” written above a hand cradling another flashing a thumbs-up, in reference to a social media campaign encouraging people to express their gratitude to health staff.

South Korea was praised for quickly containing its initial outbreak of the novel coronavirus but has recently experienced sporadic cases, such as from small gatherings at religious facilities and door-to-door sales practices outside Seoul.

Asia’s fourth-largest economy reported 63 new coronavirus cases on Wednesday, 33 of which were imported.