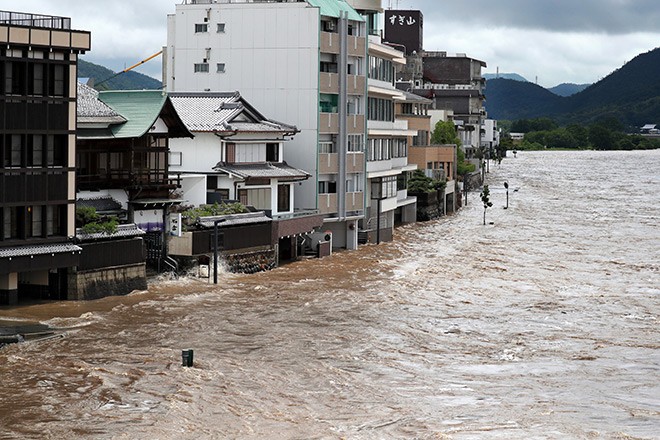 Flooding of the Nagaragawa river reaches the entrance of a hotel in Gifu city on July 8. (Mahito Kaai)

Even though it has pretty much gone out of style today, "Jimmu konokata" (literally, "since Emperor Jimmu") is probably the most hyperbolic expression ever coined in Japanese.

When the Japanese economy took off phenomenally in the 1950s, it was dubbed the "Jimmu keiki" (Jimmu economy), implying that such a boom was unprecedented since the nation's founding.

Jimmu, according to legend, became the first emperor of Japan in 660 B.C.

One is compelled to question the relevance of referencing a mere mythological figure. But the expression stuck anyway, as a figure of speech to stress any unprecedented situation or phenomenon.

A young singer was branded "the most beautiful boy since Jimmu," and an outstanding "shogi" Japanese chess player was hailed as "the greatest genius since Jimmu."

Any exaggeration is bound to instantly grab people's attention. But if overused, it becomes just another cliche.

And there is a surfeit of such expressions in media reports on natural disasters.

"Heavy rains that have never been experienced before" is one. "The situation calls for every imaginable effort to save lives" is another.

However, upon witnessing the damage caused by recent extreme weather episodes, I realize that there is nothing hyperbolic about all that mediaspeak.

Communities around the Kumagawa, Chikugogawa and Hidagawa rivers have been flooded by overflows of muddy water.

I have lost count of the times I have seen such scenes over the last few days.

While images of survivors are a welcome relief, learning about victims makes me wonder if anything else could have been done to save them.

In Kumamoto Prefecture, an emergency heavy rain warning was issued before 5 a.m. But immediately after that, the flooding of the Kumagawa river was confirmed.

I can certainly appreciate the difficulty of making an accurate forecast. Still, could authorities not have considered issuing an urgent alert sooner, even if they might be jumping the gun?

But for such a decision to be deemed appropriate, it goes without saying that the people must be willing to heed the warning and evacuate, even if that proves unnecessary later.

Perhaps everybody should start thinking that the next disaster to hit their area will be the "first of its kind since the beginning of time."

That, actually, may be the mindset we need, now that natural disasters are becoming more severe than ever in our already disaster-prone nation.