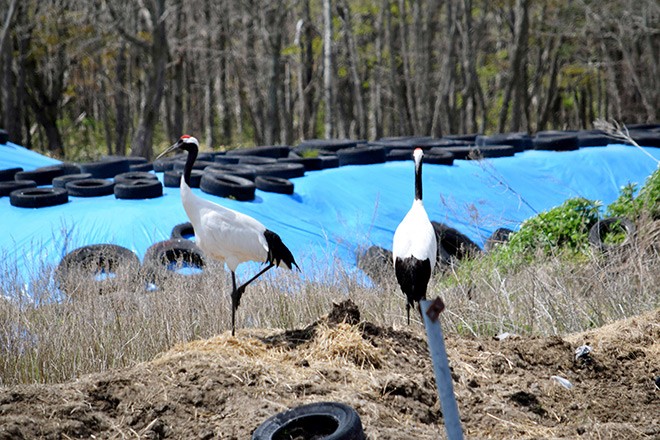 Red-crowned cranes have settled in Shibetsu, Hokkaido, a town away from the Kushiro Shitsugen wetland area. (Masami Ono)

An international nongovernmental organization’s proposal to downgrade the red-crowned crane in an animal preservation list has triggered a wave of protests in and outside Japan.

The bird species is currently included in the endangered category of the International Union for Conservation of Nature (IUCN)’s Red List.

But Britain-based BirdLife International, which is responsible for evaluating birds’ conservation status, argues the red-crowned crane should be demoted by one rank to “vulnerable.”

On Japan’s main northern island of Hokkaido, the population increased from 600 in fiscal 1995 to 1,850 in fiscal 2015, greatly contributing to global rise, the site said.

But the group’s proposal drew opposition from researchers in Japan, China, Russia and other regions. They said that although the crane numbers are increasing in Japan, they are declining in Eurasia.

Kunikazu Momose, 68, chairman of the Red-Crowned Crane Conservancy, a nonprofit group based in Kushiro, Hokkaido, said wetlands have rapidly disappeared due to recent flooding along the Amur river in the Russian Far East, the main habitats of the species in the nation.

“If the preservation status is lowered, anti-flood dam construction and development projects will be carried out on a grand scale in Russia and China, respectively,” Momose said.

The red-crowned crane was downgraded by one class from “endangered” to “vulnerable” in the 1998 revision of the Environment Ministry’s Red List.

“Their population increase has been established under the protection and breeding program,” the ministry said.

However, the cranes are now overcrowding a feeding facility that was set up in the Kushiro Shitsugen wetland area of Hokkaido during winter under the preservation project.

When many birds gather in close-contact settings, the highly pathogenic avian flu and other infectious diseases can easily spread, like the novel coronavirus among humans.

To address the problem, the government reduced the amount of food provided at the feeding site to push red-crowned cranes to other places in winter.

But there are few spots rich in food for the bird in the wild, so the endeavor has not been effective so far.

A representative of the Environment Ministry’s Kushiro natural environment office in charge of the bird’s protection policy said a full recovery of the species is still a long way off.

“Much more effort will be necessary even in Japan before the threat of extinction vanishes without the artificial feeding program,” the representative said.

(This article was written by Masami Ono and Ichiro Matsuo.)