Robot to use brush to retrieve melted fuel at Fukushima plant 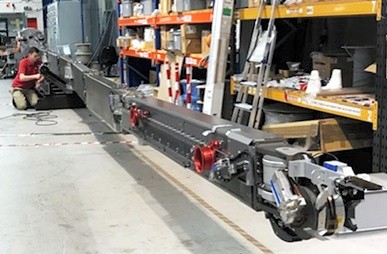 The robotic arm to be used for collecting melted fuel at the No. 2 reactor of the Fukushima No. 1 nuclear power plant (Provided by the International Research Institute for Nuclear Decommissioning)

FUKUSHIMA--A robotic arm under development in Britain will use a brush and vacuum vessel on its end to collect melted fuel in a step toward retrieving debris at the crippled Fukushima No. 1 nuclear power plant.

Details of the device, which will start collecting debris inside the No. 2 reactor on a trial basis next year, were announced on July 2.

The government and plant operator Tokyo Electric Power Co. plan to retrieve melted fuel at the No. 2 reactor ahead of two other reactors because radiation levels are relatively low.

The No. 2 reactor, along with the No. 1 and No. 3 reactors, suffered meltdowns following the Great East Japan Earthquake and tsunami in 2011.

The situation inside the No. 2 reactor is relatively known through past inspections. It has been confirmed that apparent debris in the lower part of its containment vessel can be collected with a robot.

Measuring 22 meters long and weighing 4.6 tons, the robotic arm will be made of high-strength stainless steel so it will not bend when stretched out.

It will be inserted into a closed box connected to a hole made on the side of the containment vessel and remotely operated to prevent radioactive substances from being released.

The arm will attach powdered nuclear debris to its brush and also suck the debris with its vacuum vessel.

Under the plan, debris totaling approximately 1 gram or so will be collected in each of the several rounds of the trial procedure.

An experiment will start in Britain as early as August with the use of a model of the containment vessel.

The robotic arm will be transported to Japan around February for the training of operators at the Japan Atomic Energy Agency’s facility in Naraha, Fukushima Prefecture.

The retrieved fuel will be measured for weight and radiation levels, put in a metal transfer vessel and moved to an analysis center in Ibaraki Prefecture.

In the full-scale retrieval stage, different equipment will be used.

Melted fuel to be removed is estimated to record a radiation reading of 6 millisieverts per hour even at distances of 20 centimeters from it.

That means the annual dose limit for ordinary individuals of 1 millisievert will be reached in 10 minutes.

Training is expected to reduce the time required for workers to put debris into the transfer vessel near the fuel.

Other measures to lessen workers' doses will be taken, such as introducing panels to block radiation.