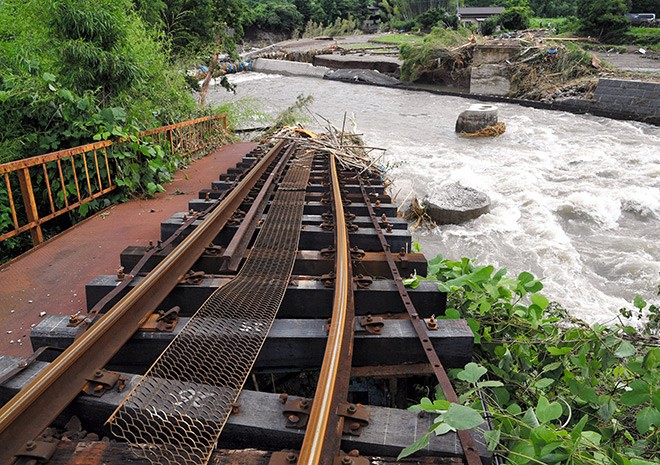 The heavy rains that have pummeled the Kyushu region in recent days have severely damaged railway lines on Japan's southernmost main island and washed away a number of historic rail bridges.

The damage not only cuts off a means of transportation for local residents, but could have major ramifications for tourism on Kyushu as some of the more luxurious sightseeing trains use the tracks that have been wrecked.

In northern Kyushu, most of the major damage was concentrated in Oita Prefecture. Officials of the Kokonoe town government confirmed on July 7 that a bridge over the Nogamigawa river used by the JR Kyudai Line had been washed away.

The Kyudai Line has been damaged by heavy rains in the past. A bridge in Hita, Oita Prefecture, was washed away by the heavy rains that inundated northern Kyushu in July 2017. That section was only reconstructed in July 2018.

The Kyudai Line tracks are used by other sightseeing trains, such as the Yufuin no Mori, which connects Hakata in Fukuoka Prefecture, with the popular Yufuin hot spring resort in Oita.

But the line also provides a valuable means of transportation for local residents because it cuts across northern Kyushu.

“This is our only means of going in the direction of Oita. Many elderly residents who go to distant hospitals will likely be inconvenienced,” said Mitsuhiro Hoashi, 58, a community leader in the area where the bridge was washed away.

The JR Hitahikosan Line, connecting Hita in Oita with Kita-Kyushu in Fukuoka Prefecture, was heavily damaged by the torrential rains three years ago.

A plan to use alternative bus transportation between Soeda and Yoake stations because the tracks cannot be reconstructed was only agreed to in May.

“It might take another three or four years to reconstruct the rail line. I am worried (the Kyudai Line) might also simply be abolished,” said Fujio Kanayama, 74, a Kokonoe resident.

Two historic iron bridges used by the JR Hisatsu Line and spanning the Kumagawa river have been washed away, according to officials of the Kumamoto prefectural government and the land ministry.

The bridges, constructed in the Meiji Era (1868-1912), were designated by the economy ministry as remnants of industrial modernization.

Other sections of the line have been hit by collapsed track foundations and flooded stations.

Because of the declining population in Kyushu, Kyushu Railway Co. had focused on sightseeing trains as an important pillar in generating profits.

The tracks of the damaged Kyudai and Hisatsu lines are also used by the luxury sleeper cruise train, the Nanatsuboshi (Seven Stars).

Service on the Nanatsuboshi had been suspended from March because of the novel coronavirus pandemic and the sharp decrease in foreign tourists. Plans had called for resuming service from July 14.

“We are worried every year about whether the tracks will be all right," said a JR Kyushu official. "We can never predict the costs that may arise due to natural disasters so that constitutes a major risk for company management.”

The situation is even more dire for railway companies that combine capital contributions from both the private and public sectors and have a weaker financial foundation to begin with.

The Kumagawa Railroad, which connects the Hitoyoshi hot spring resort in Kumamoto Prefecture with Yunomae, also in the prefecture, had one of its historic bridges destroyed by flooding. All five trains owned by the company were submerged when stopped at the Hitoyoshi Onsen Station.

About half of the Hisatsu Orange Railway, which operates between Yatsushiro, Kumamoto Prefecture, and Satsuma-Sendai, Kagoshima Prefecture, has been damaged by landslides. The hardest-hit area is an exit to a tunnel where dirt has piled up to heights of four and five meters.

It is not unusual for many so-called third sector railway companies to simply abandon lines rather than try to reconstruct them. In other cases, alternative bus services have been started in place of the railways.

At a July 7 news conference, Takayasu Ideta, president of the Hisatsu Orange Railway Co., said, “We face a situation that relates to the very survival of the railway, but we want to protect the means of transportation for local communities.”

(This article was written by Ayano Nakazawa, Yasuyuki Onaya and Go Katono.)