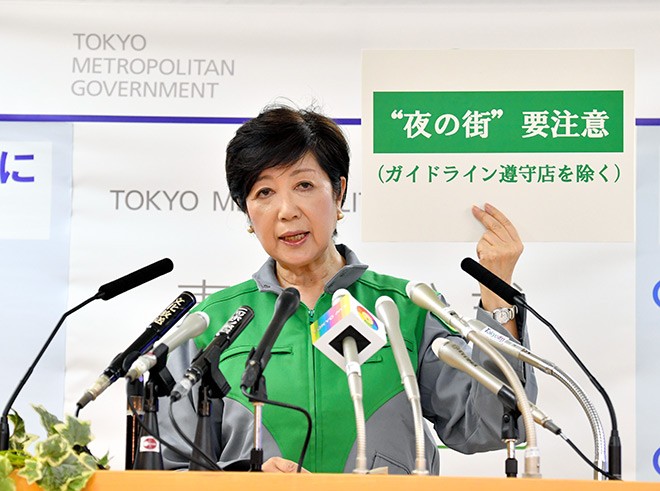 Tokyo Governor Yuriko Koike holds up a sign calling for precautions against visiting entertainment districts, where many coronavirus cases were confirmed, at a news conference on July 2. (Takuya Isayama)

With many nightclubs turning into COVID-19 hot spots, the Tokyo metropolitan government plans to subsidize local governments if they provide emergency relief to these venues that agree to shut down.

The metropolitan government will offer up to 500,000 yen ($4,630) per nightclub in subsidies to local governments.

“We are hoping to minimize the impact on the economy by focusing on certain areas, rather than the entire Tokyo, for closure requests, while working to contain the spread” of the infectious disease, a senior metropolitan official said.

Toshima, Shinjuku, Ota and Chiyoda wards, all home to large red-light districts, are considering utilizing the new subsidy system, according to metropolitan officials.

The cost for such subsidies, called “cooperation money,” was included in the metropolitan government’s supplementary budget proposal totaling 300 billion yen or so, which was announced on the afternoon of July 9.

The subsidy system will enable operators of nightclubs to receive a maximum 500,000 yen per outlet if they close for at least 10 days based on requests by local authorities.

Some of the affected wards have expressed their intention to use the subsidy system, according to Tokyo officials.

The COVID-19 infections are spreading through host clubs and cabaret clubs in the entertainment districts of the capital, most notably in the Kabukicho district in Shinjuku Ward and the Ikebukuro district in Toshima Ward.

Those who tested positive at such settings accounted for 277, or 37 percent, of a total of 756 cases confirmed over a week through July 8.

Of the 277, 208 were infected in Shinjuku Ward, while 18 cases were recorded in Ikebukuro of Toshima Ward.

Toshima Ward announced on July 7 that a host club that had outbreaks will receive 500,000 yen as a cooperation fee if they meet the ward’s request for temporary closure.

Tokyo Governor Yuriko Koike signaled a willingness to back the Toshima Ward’s effort when ward officials requested financial assistance from the metropolitan government.

(This article was written by Yusuke Nagano and Chiaki Ogiwara.)