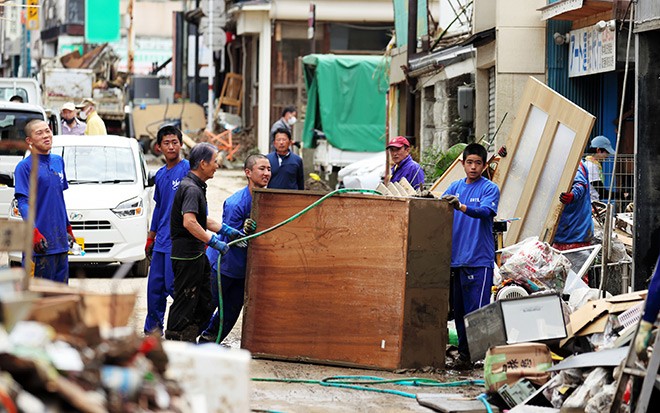 The first floor of Ryoko Yoshioka's laundry in the Kamisatsumazemachi district in Hitoyoshi city was almost completely inundated by the torrential rain that pounded Kumamoto Prefecture on July 4 and 5.

In the cleanup afterward, with help from her relatives, Yoshioka, 67, loaded three truckloads of debris from her shop, where she also lives.

On July 7, she went to a temporary disaster dump site designated by the city government. Due to congestion at the site, she had to wait, but a staff member did not accept the loads she brought, saying it was closed for the day.

Yoshioka returned from the disposal site six and a half hours after leaving home.

“I didn’t expect that I couldn't dispose of the debris,” she said.

Areas hit hard by the torrential rain that flooded parts of Kumamoto Prefecture were left to deal with the huge amount of debris from the disaster.

Cars are lined up every day with residents hoping to dispose of the debris at temporary disaster dump sites designated by city and town governments.

In the central part of Hitoyoshi in the prefecture, there are many shops along the Kumagawa river, which overflowed due to the heavy rain. On the morning of July 8, shop owners were seen bent over scooping mud out of their shops and washing off chairs and shelves. TVs, pots and stuffed animals were piled up all over the roughly 1-meter wide sidewalk.

The Environment Ministry is urging municipalities to draw up a plan to dispose of waste from natural disasters, such as flooding and earthquakes, by calculating the estimated amount and designating temporary dump sites and their opening periods in advance.

The Ashikita town government in Kumamoto Prefecture estimated that it would have about 249 tons of disaster debris on the assumption that damage from flooding would be almost the same as that from the torrential rains that hit northern Kyushu in 2012.

The town government, therefore, planned to use four sites it owns as temporary disposal locations.

However, damage brought by the torrential rain this time well exceeded its estimate.

Since one of the four sites became inaccessible as a road leading to it was cut off, the town government decided to use another vacant parcel it owns instead. That brings the total area of temporary dump sites in the town to about 9,100 square meters, twice the size it initially planned.

As of July 7, a town government official said two of the sites were already filled with debris. On July 8, the government designated two additional unoccupied parcels as temporary disposal sites.