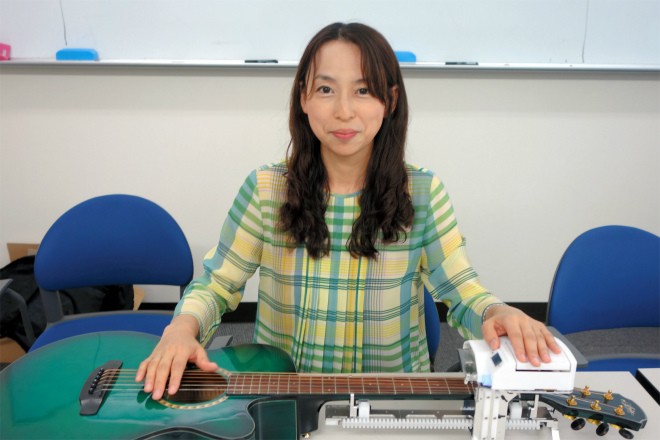 TSU—A visit to a day service center in 2015 has led to an assistance device that puts the magic of playing music into the hands of disabled people.

Yukiko Nishinohira, now 44, said she was inspired by repeated requests from disabled individuals at the facility in Kameyama, Mie Prefecture, to try out her acoustic guitar, which she had brought along as a volunteer music therapist.

Now a researcher at Mie University’s Graduate School of Engineering, Nishinohira created equipment to help cerebral palsy and other patients who are unable to move their hands to wield guitars.

“I want many people to enjoy playing musical instruments irrespective of whether they have physical disabilities,” Nishinohira said.

As an undergraduate at Mie University, she majored in robot engineering while performing as a piano player in a big jazz band. After completing her master’s degree at the university, she started studying music therapy.

When she visited the facility in Kameyama, she saw a physically disabled person with cerebral palsy use fingertip movements to click on a computer mouse. Nishinohira said she began thinking of a “way to hold guitar strings in the same way.”

She completed a prototype in 2017 after seeing advice from day care center users and licensed physical therapists.

The support tool mounts on the guitar neck and can be slid manually to determine the desired sounds. When the device is clicked like a computer mouse, it pushes all six strings simultaneously while strings are plucked with the user’s other hand.

Yasuyuki Ito, 34, has practices with the accessory and can now perform in front of live audiences.

Ito, who lives in Sanda, Hyogo Prefecture, injured his cervical vertebra in a traffic accident.

He volunteered to test the device in the development phase because he “wanted to play guitar again as music was my hobby.”

In December 2018, Ito showed off his technique at an academic conference in Tokyo. He drew applause after hitting guitar chords while playing a harmonica in the chorus of the Beatles’ masterpiece “Let It Be.”

“I can still refine my skills further by practicing harder,” he said.

Nishinohira continues fine-tuning the assistance tool. With its use expected in physical rehabilitation programs, she added a feature in April that records the number of slides.

Nishinohira said her encounter with Ito and others made her realize that “performances by those who have overcome difficult times can move the hearts of people.”

She plans to adopt her technology for other instruments to give more individuals a chance to play music.