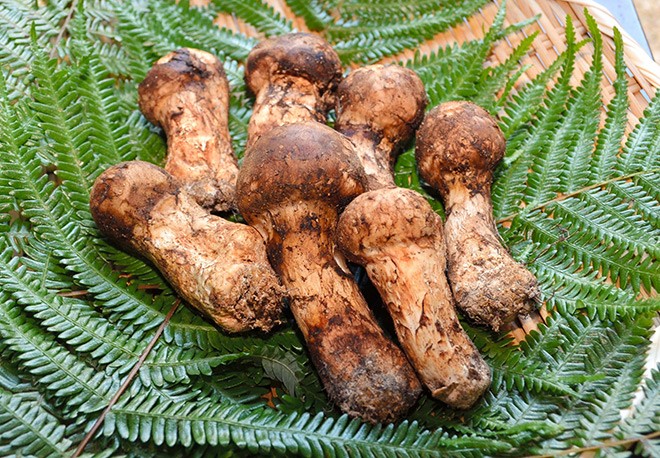 Matsutake mushrooms, which like truffles are highly prized for their delicate taste and scarcity, were designated as a threatened species for the first time by the International Union for Conservation of Nature (IUCN).

Although no restrictions are immediately planned on the consumption of matsutake, there will be probably fewer opportunities to consume the fungal treat this autumn due to the need to protect it.

The IUCN announced inclusion of the fungus in the organization's latest red list of threatened species on July 9.

Matsutake, which grow mainly in north-central Europe, Russia and Asia, are often used in suimono (clear soup) or mixed with rice as a taste treat.

Annual consumption of matsutake in Japan is about 1,000 tons, according to the Forestry Agency. The figure is far less than that for shiitake and shimeji mushrooms, each consumption of which ranges from between 70,000 tons and 120,000 tons annually.

Most matsutake are imported from China and Canada as domestic production is less than 100 tons.

Officials noted that the 2019 domestic harvest, at 14 tons, was the lowest on record since 1960 when the government started to keep track of such things.

“Many people have fewer chances to eat matsutake mushrooms these days, so I can’t say what impact the listing as a threatened species will have,” said an agency official.

Kentaro Hosaka, senior curator at the Department of Botany of the National Museum of Nature and Science in Tokyo, said matsutake mushroom numbers are dropping sharply due to “healthy pine forests shrinking, not because people are eating too many.”

Hosaka said that even if people stopped eating the mushrooms, numbers would not increase.

"So it is more important than ever to prevent pine forests from shrinking,” he said.

Hosaka, a fungi specialist, also noted that there are other more vulnerable mushrooms than matsutake due to environmental changes.

Tsutomu Hattori, a specialist in fungi ecology and director at the Department of Mushroom Science and Forest Microbiology of the Forestry and Forest Products Research Institutes, noted that Japanese people tend not to gather up tree branches and fallen leaves these days, which makes soil richer than before.

He said that results in a decrease in soil with lower nutrients, ideal conditions for matsutake, causing other mushrooms to grow.

In some cases, pine trees are dying out due to parasitic nematodes, which originate in North America. Across Europe, pine forests are shrinking due to deforestation.

“The scent of matsutake mushrooms in dobinmushi (steam-boiled in an earthenware teapot) and mixed rice are a reminder of colorful mountain scenery and the coming arrival of autumn," said Yoshihiro Murata, representative director of the long-established restaurant Kikunoi. "That is the spiritual richness of the food culture we should be trying to protect. Substituting matsutake with other mushrooms if matsutake are not there does not solve anything.”

The Tanba region in the Kansai area was once a leading production area, but matsutake production gradually moved to Japan's north.

Iwate Prefecture is now the nation's leading producer. But year after year, matsutake are getting more difficult to find, resulting in higher prices.

Murata, 68, called on the public to accept that matsutake are now listed as a threatened species and reconsider how they view food in general.

“People should not try to grab as many matsutake as they can just for short-term profit or greed,” he said. “We need to come up with ideas together and protect the environment to allow future generations to eat them, too.”

The IUCN red list assessed 120,372 species, of which 32,441 species were designated as threatened with extinction.