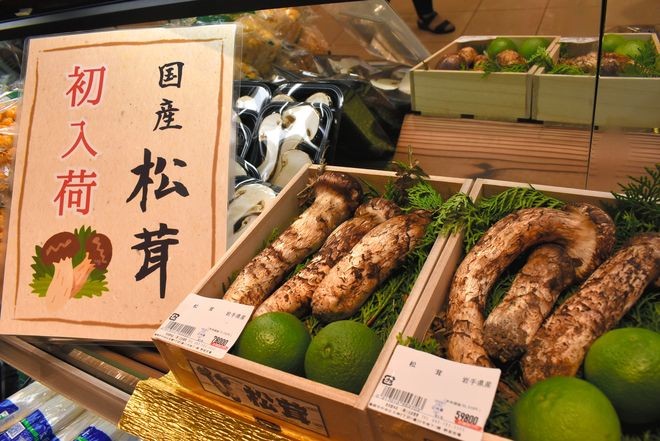 Let's think autumn to forget the heat for now.

In his essay titled "Mimitabu no Aki" (Autumn earlobe), author Tetsuo Miura (1931-2010) recalls venturing into the mountains one autumn with a friend to pick "matsutake" mushrooms, arguably one of the most prized delicacies in Japan.

To savor the freshly-harvested matsutake with beer, Miura and his friend roasted them whole on a campfire, pulling them apart with their fingers. Oh the luxury!

On their way home on the train, Miura kept getting a whiff of the mushroom's exquisite aroma. He wondered where it was coming from, because he had washed his hands thoroughly after the feast.

It then occurred to him that his earlobe had to be the source of the fragrance. He had touched his earlobe repeatedly to cool his burning fingertips while pulling the hot, juicy roasted matsutake.

Reading this account consumes me with envy, all the more because matsutake today are so hard to come by in Japan.

The Asahi Shimbun on July 10 reported an even sadder reality: The International Union for Conservation of Nature (IUCN) has designated the matsutake as a "vulnerable" species.

I immediately thought of over-harvesting as the cause, but that's apparently not the reason.

The newspaper quoted an expert as saying that the scarcity owes to "the shrinking of healthy pine forests."

Even though the expert said there is no need for us to stop eating the mushrooms altogether, I'm sure that's really no consolation for most of us.

In fact, I can imagine some people declaring, "In our household, it's already been quite a while since the matsutake became an endangered species."

The Anthropocene is a recently proposed geological epoch that denotes the magnitude of the impact of human activity on the Earth's ecosystem.

Homo sapiens is a sinful animal that has driven myriad other species into extinction, and the destruction has been accelerating in recent years.

Increasingly, we are coming across news of endangered species affecting what we put on the dinner table.

Before the matsutake, there were the Japanese eel and the bluefin tuna.

I wonder how many more species are going to join the list.