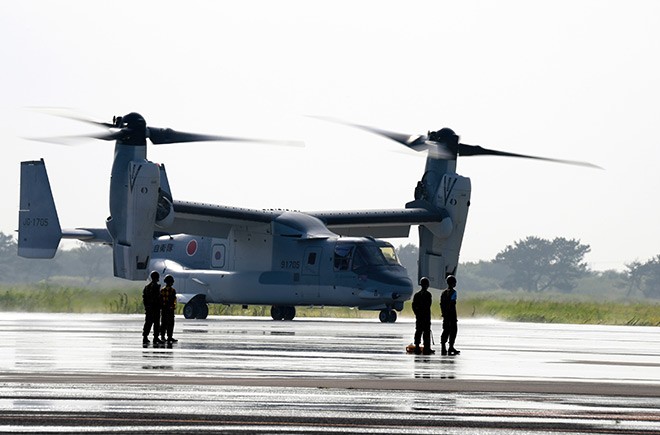 The first of 17 Osprey transport aircraft to be eventually used by the Ground Self-Defense Forces arrived for temporary deployment at Camp Kisarazu in Chiba Prefecture outside Tokyo on July 10.

The fixed-wing, tilt rotor aircraft was to have arrived on July 6 to Camp Kisarazu from the U.S. Marine Corps Air Station Iwakuni, where two Ospreys were inspected and maintained after being unloaded from a U.S. ship in early May.

But heavy rains in western Japan delayed the departure of the Osprey until July 10.

The Ospreys were due to be permanently deployed to Saga Airport on the main southern island of Kyushu, but those plans were scuttled by local fishermen who own land needed for the facilities and refuse to sell up.

The temporary deployment to Camp Kisarazu is for a maximum five-year period following an agreement reached with the city government effective as of July 10.

Eventually, 17 Ospreys will be temporarily deployed there.

Defense Ministry officials said they still had no idea when the second Osprey will arrive at Camp Kisarazu.

Local residents are opposed to the deployment on grounds of the aircraft's safety record and loud noise when it is in operation.

There are also concerns that the temporary deployment will end up being of a more permanent nature.

The government approved acquisition of the Ospreys in 2013 to handle transportation of amphibious mobile units based in Sasebo, Nagasaki Prefecture, to defend the island chain off the southwestern cost of Kyushu.

By being based in Chiba Prefecture, they will not be able to fulfill that mission.

Ospreys are designed to land and take off like a helicopter, but can also fly like fixed-wing aircraft.

They can reach speeds of up to 465 kph, about double that of the CH-47 helicopter now used by the SDF for transport purposes. The Osprey also has a maximum flying distance of around 2,600 kilometers, about three times the capability of the CH-47.

(This article was written by Nobuyuki Yoshie and Yoshitaka Ito.)