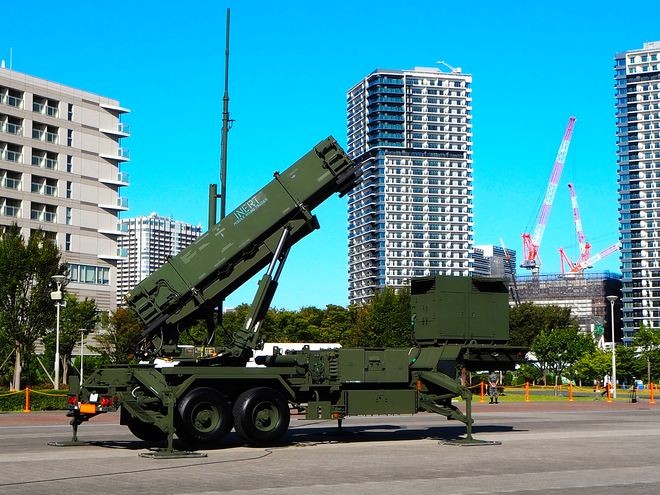 A PAC-3 interceptor missile unit is set up for a simulated training exercise in Tokyo in October 2019. (Asahi Shimbun file photo)

An enhanced ground-based interceptor missile has been installed on the grounds of the Defense Ministry in Tokyo following the recent decision not to deploy the Aegis Ashore ballistic missile system.

A PAC-3, or Patriot Advanced Capability, interceptor missile had already been set up on ministry grounds in Tokyo’s Ichigaya district.

However, the improved PAC-3 MSE version, installed on the morning of July 10, doubles the defense capability because it can intercept incoming ballistic missiles at higher altitudes.

The PAC-3 missiles, operated by the Air Self-Defense Force, are designed to intercept ballistic missiles as they approach the ground after descending from space.

There are 34 PAC-3 missile units at 17 facilities around Japan, but most are still of the original version.

The Defense Ministry has been upgrading the missile and four enhanced versions had been installed by June at ASDF bases in Narashino, Chiba Prefecture; Hamamatsu, Shizuoka Prefecture; as well as at the Ashiya and Tsuiki air bases, both in Fukuoka Prefecture.

But the installation on July 10 of a PAC-3 MSE missile on Defense Ministry grounds was the first in central Tokyo. Sources said the next-generation version was to take the place of the PAC-3 missile that had previously been set up on ministry grounds.

The PAC-3 interceptor missiles are the second line of defense against ballistic missiles. The SM-3 missiles aboard Maritime SDF Aegis destroyers are intended to shoot down ballistic missiles while they are still outside of the atmosphere, but any that are missed would be targeted by the PAC-3.

The Aegis Ashore system had initially been intended to provide a third line of defense, but the government decided to stop the deployment in June amid a myriad of concerns, including local opposition.

That made upgrading the PAC-3 interceptor missiles a more urgent task.