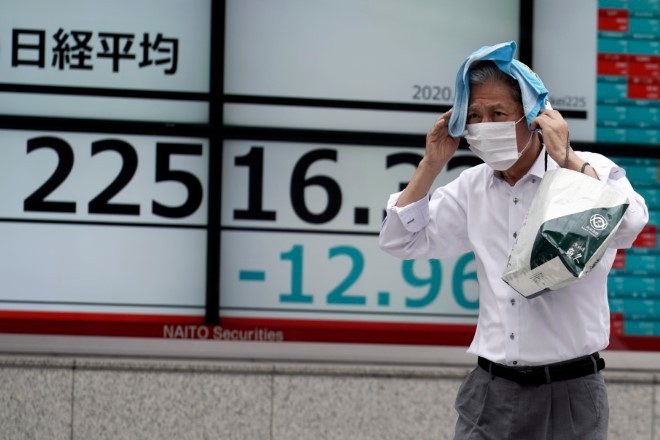 A man walks in the rain past an electronic stock board showing Japan's Nikkei 225 index at a securities firm in Tokyo on July 10. (AP Photo)

SYDNEY--Asian shares got off to a firm start on Monday as investors wagered U.S. earnings season would see most companies beat forecasts given expectations had been lowered so far by coronavirus lockdowns.

MSCI’s broadest index of Asia-Pacific shares outside Japan added 0.15 percent, having climbed sharply to a five-month peak last week on the back of surging Chinese stocks.

Japan’s Nikkei gained 1.3 percent and South Korea 0.9 percent. E-Mini futures for the S&P 500 rose 0.2 percent even as some U.S. states reported record new cases of COVID-19, a divergence that shows no sign of stopping.

“Ongoing grim U.S. COVID-19 infection news continues to be summarily ignored in favor of ongoing optimism regarding the time-line for the discovery and rapid roll-out of an effective vaccine and/or more policy support for asset prices and the U.S. economy,” said Ray Attrill, head of FX strategy at NAB.

“JP Morgan, Citigroup and Wells Fargo all report on Tuesday and there’s a view that the bar has been set pretty low for them to report the almost obligatory ‘better than expected’ results--the absence of forward guidance from many firms notwithstanding.”

Wednesday sees Goldman Sachs and Bank of NY report, while Thursday has Netflix and Morgan Stanley.

While bank shares rose sharply on Friday they have been badly lagging technology stocks, with analysts at Bank of America noting tech outperformance in the past six months was greatest since the 1999 tech bubble and the 2008 global financial crisis.

Super-low rates have in turn been a boon for non-yielding gold which hit a near nine-year high after five straight weeks of gains. The metal was last at $1,800 an ounce, just off a $1,817.17 top.

The hunt for yield has tended to benefit emerging market currencies and those leveraged to commodities such as the Australian dollar, while weighing on the U.S dollar.

Oil prices eased in early trade, although that followed a sharp rise on Friday when the International Energy Agency (IEA) bumped up its 2020 demand forecast.