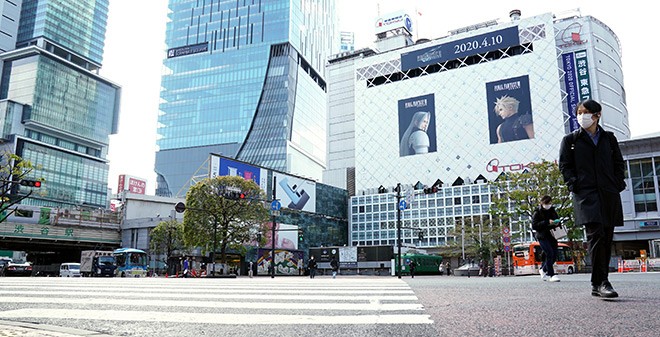 Few pedestrians are out at the Shibuya scramble crossing in Tokyo on April 11 on the first weekend after the central government declared a state of emergency for the capital over the novel coronavirus. (Ryo Kato)

Spending to contain the novel coronavirus has drained the reserve funds of most of Japan's prefectural governments by more than half, limiting their financial resources to combat a second wave.

The prefectures have shelled out more than 1 trillion yen ($9.36 billion) to date in response to the virus, according to an Asahi Shimbun survey.

That suggests that they will now have only limited funds to grapple with a surge in COVID-19 cases in the coming months, a situation likely to be exacerbated by an expected plunge in tax revenues due to shutdowns of businesses.

All 47 prefectures responded to the survey conducted earlier this month, which asked about the amount each prefectural government has spent from its public finance adjustment reserve fund since April to cope with the outbreak.

As of the end of fiscal 2019, which ended in March, the prefectures had a combined 1,886.8 billion yen in reserve funds.

But they spent 1,085.2 billion yen in dealing with the health crisis, reducing the money in their reserves by 58 percent, the latest figures in the survey showed.

Of the 47 prefectures, 42, including the Tokyo metropolitan and Osaka prefectural governments, tapped into their rainy day funds. But Saitama, Chiba, Gifu, Kyoto and Hyogo have not, relying on other financial resources.

Kyoto and Hyogo prefectures said they used emergency grants given by the central government to respond to the outbreaks.

The public finance adjustment reserve funds are set aside by local governments for an emergency, such as shortfalls in financial resources and unanticipated expenses. They can establish such funds through adopting an ordinance under the local finance law.

The Tokyo metropolitan government spent the most of all the 42 prefectures that turned to the reserve funds during the crisis, at 852.1 billion yen, the survey found.

Ishikawa Prefecture reported the highest reduction rate of 91.9 percent to its reserve funds, according to the survey.

Many of the prefectures that reported a large reduction rate in the funds had a relatively small prefectural budget.

Most prefectures said they used the funds to finance emergency relief packages for businesses that remained closed at the request of local authorities.

The Tokyo metropolitan government provided “cooperation money” of up to 1 million yen to businesses each while they were shut down.

Numerous prefectures also said they dipped into their reserves to bolster the public health care system.

Kanagawa Prefecture diverted about 6.5 billion yen from its reserves to construct prefabricated structures that will be used as emergency health care facilities.

(This article was written by Shohei Sasagawa and Chinami Tajika.)