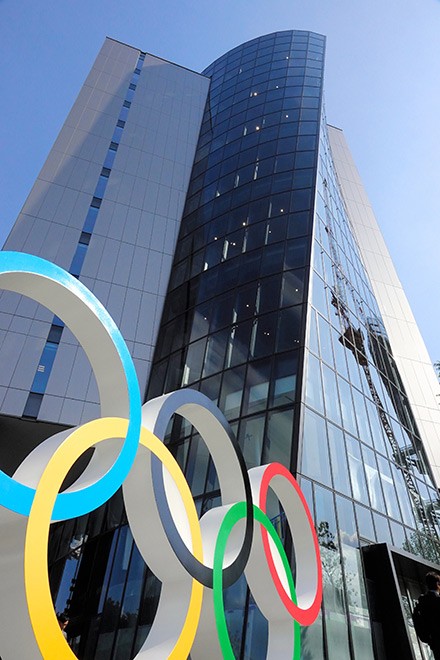 The offices of the Japan Olympic Committee and many national sports federations are located at the Japan Sport Olympic Square in Tokyo. (Asahi Shimbun file photo)

Japanese sports federations, already hurting financially from the new coronavirus pandemic, are lamenting the decision by the Japanese Olympic Committee (JOC) to more than halve grants to those groups.

The committee said it cannot estimate the revenue amount from sponsors in and after fiscal 2021 because of the one-year postponement of the 2020 Tokyo Olympics.

With the novel coronavirus pandemic still raging, holding the Games next year is not guaranteed.

“Operating revenue in the next fiscal year could be zero, so we have to decrease expenditures this fiscal year and use the leftover amount next fiscal year,” a senior JOC official said. “We have no choice but to make some sacrifices.”

One official of a national sports federation said of the budget, “I felt that the essential part was cut off.”

The grants are distributed to each federation from the JOC’s own revenues, and the associations have total freedom to decide how to spend the money.

Normally, at least 10 million yen has been given to each federation of an Olympic sport. But if they represent sports that Japanese are likely to win Olympic medals in, they could receive nearly 100 million yen.

The JOC listed about 12.8 billion yen in operating expenses in its fiscal 2020 budget, a decrease of about 2.9 billion yen from last fiscal year.

Nearly half of the reduction was for the grants.

A senior official of a federation said, “They cut that part first.”

Many sports federations have already suffered from a reduction in registration fees for athletes and revenue from sponsors because of the COVID-19 pandemic.

The JOC’s revenue for the enhancement grants comes mainly from sponsors, including fees for the use of Olympic logos.

The JOC said it cannot predict how many sponsors can be signed for the 2021 event nor how much revenue it will take in.

The JOC at its board of directors meeting decided to hold regular talks with national sports federations “to communicate closely”.

“We want the JOC to stay closer with us in this difficult situation by, for instance, allowing us to receive some loans from the JOC,” a source close to a federation said.