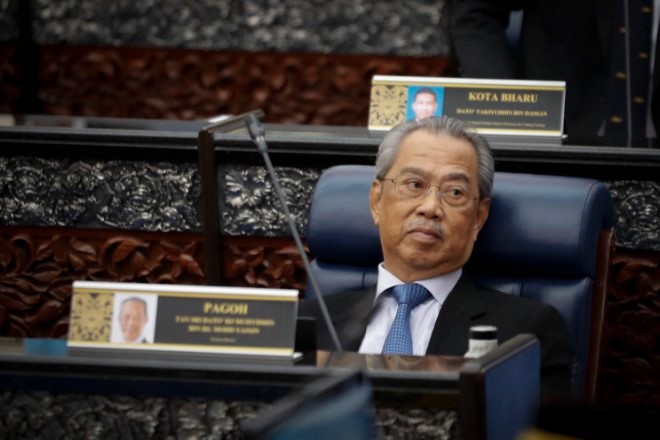 KUALA LUMPUR--Malaysia’s Prime Minister Muhyiddin Yassin cleared a major hurdle in parliament on Monday, with lawmakers narrowly backing his bid to remove the Lower House speaker in a vote seen as an important barometer of his support.

While not officially a confidence vote, the outcome--a win by just two votes--was the first real litmus test of how much legislative support Muhyiddin could muster to push through policies and government business.

Muhyiddin’s bid to remove speaker Mohamad Ariff Md Yusof, who was appointed by the previous administration led by Mahathir Mohamad, was backed by 111 lawmakers, with 109 against it.

Southeast Asia’s third-largest economy has been grappling with political uncertainty since Muhyiddin, who was part of Mahathir’s administration, was unexpectedly made prime minister in March.

Muhyiddin forged an alliance with the graft-tainted UMNO party that was defeated in a 2018 election. The opposition has accused him of grabbing power by shifting alliances instead of earning it at the ballot box.

The win, however, has done little to ease the uncertainty and only reinforces how slim Muhyiddin’s majority is in parliament.

He is preparing for snap election by the end of the year to seek a firm mandate, Singapore’s Straits Times newspaper reported in June, amid questions over his legislative clout.

Mahathir has pushed for a confidence vote on Muhyiddin’s leadership, but the prime minister avoided that in the last parliament session in May, when the Lower House convened for only one day due to the coronavirus pandemic.

Mahathir and others in the opposition, including Anwar Ibrahim, have vowed to oust Muhyiddin.

Under the federal Constitution, a prime minister who has lost the confidence of parliament must dissolve his Cabinet, unless requested otherwise by the king.