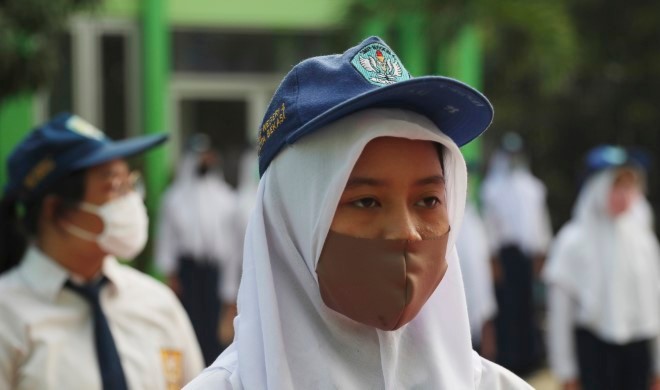 Students wear face masks as a precaution against the new coronavirus during the first day of reopening of state high schools in Bekasi on the outskirts of Jakarta on July 13. (AP Photo)

The total of 878,254 is behind only the United States and Brazil. The Health Ministry on Monday also reported another 500 deaths in the past 24 hours, taking India’s total fatalities from COVID-19 up to 23,174.

The ministry said the recovery rate was continuing to improve at 63 percent.

India imposed a national lockdown March 24 that lasted more than two months, but it has mostly reopened.

AUSTRALIA’S worst-hit Victoria state recorded fewer coronavirus cases, but a health official has warned the disease spread might yet worsen. The 177 new cases were substantially down from 273 cases on Sunday and a record 288 on Friday. Victoria’s Chief Health Officer Brett Sutton said it was too early to say whether the lower count meant the spread was being contained. “It’s great it’s lower than our peak. But it may not be our peak yet,” Sutton said. Melbourne and a part of its surrounds in Victoria returned to lockdown last week. Neighboring New South Wales state recorded a rare day in which the COVID-19 cases from community transmission outnumbered cases of infections overseas. Eight of its 14 new cases are linked to a Sydney pub while four were returning travelers diagnosed in quarantine.

Organizers of HONG KONG’s annual book fair have postponed the event just two days before it was due to start, as the city grapples with a third wave of coronavirus infections. The book fair, which draws hundreds of thousands of visitors each year, will be rescheduled. Hong Kong has seen a spike in the number of locally transmitted cases, prompting a suspension of all schools and tightened social-distancing measures. The city reported 30 new local infections on Sunday. So far, Hong Kong has reported 1,470 infections and seven deaths.

SOUTH KOREA reported 62 new cases, most of them tied to international arrivals. At least 43 of the new cases were imported by travelers, although the Korea Centers for Disease Control and Prevention didn’t immediately say where they were from. South Korea on Monday began requiring foreign nationals arriving from Bangladesh, Pakistan, Kazakhstan, and Kyrgyzstan to provide health certificates proving they had tested negative for COVID-19 amid widening outbreaks in Southern and Central Asia. South Korea has been requiring two-week quarantines on all airline passengers arriving from abroad since April.

CHINA reported eight new cases, all of them brought from outside the country, as domestic community infections fall to near zero. No more deaths were reported, and 320 patients remain in treatment, with another 117 people under isolation while being monitored for being suspected of having the virus or having tested positive for it without showing symptoms. China has reported 4,634 deaths from COVID-19 out of 83,602 cases since the virus was first detected in the city of Wuhan late last year.