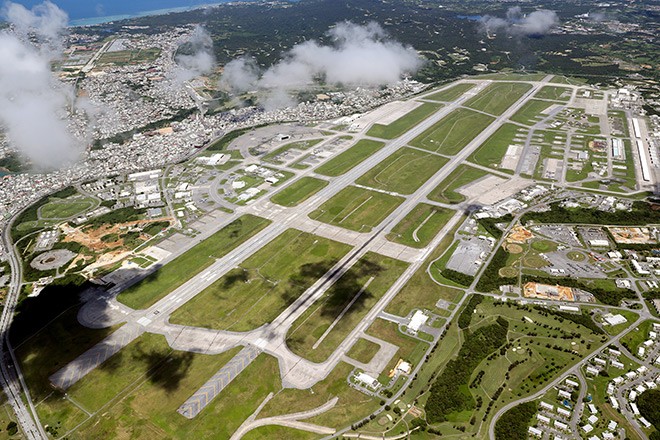 A recent rash of COVID-19 cases among U.S. military personnel in Okinawa left the prefectural government scrambling to persuade notoriously reticent U.S. authorities to divulge details so they can trace routes of infection to thwart the spread of the disease.

Officials in the southernmost prefecture are at a loss over how to proceed as only limited details are being released.

Ninety-five cases were reported in the one-week period until July 13.

To prevent the spread of novel coronavirus infections outside of U.S. bases, prefectural authorities need to know who the individuals came into contact with so that polymerase chain reaction (PCR) tests can be carried out.

In past cases, U.S. military officials passed along information about what the infected individuals did outside bases before they were confirmed infected, according to prefectural government officials.

That was the case in March when three individuals at the Kadena Air Base were confirmed as infected as well as on July 7 when five people tested positive at the U.S. Marine Corps Air Station Futenma.

Since then, the only information submitted to the Okinawa prefectural government has been the number of cases and the base where the infected individuals were stationed.

“We have no way of knowing whether the large number of infections has made it difficult for the U.S. military to accurately grasp the details or if they have the details but are not disclosing them," said a high-ranking prefectural government official in charge of public health and medical care.

"The prefectural government is asking for such information as infection routes and a record of where the infected people were," the official added. "We are also worried about whether the U.S. military hospital will be capable of dealing with a situation in which many patients develop serious symptoms.”

With so little information provided by the U.S. military, the prefectural government has turned to municipal governments and local residents to gather whatever information it can.

One piece of information that came its way was that many U.S. military personnel, including some who were later confirmed infected, visited bars and clubs on July 4, U.S. Independence Day, in Chatan in the central part of the main Okinawa island where many U.S. military facilities are located.

The prefectural government called on those working in bars and restaurants as well as customers to take PCR tests. On July 12, 130 individuals were given the test even if they did not have obvious symptoms.

The central government clings to the position that the U.S. military is sharing information about infections among military personnel.

“We have been in close contact with the United States about the necessary information regarding infections among U.S. military personnel, such as the number of cases and the facilities and areas where those individuals were affiliated with,” Chief Cabinet Secretary Yoshihide Suga said at his July 13 news conference.

Local government officials clearly do not share that view.

On May 27, the group of 15 governors who oversee prefectures where a U.S. military facility is located submitted requests to Foreign Minister Toshimitsu Motegi and Defense Minister Taro Kono asking them to lobby their U.S. counterparts to more aggressively release information related to COVID-19 infections among U.S. military personnel.

The issue was also taken up in the Diet.

At the June 22 session of the Upper House Audit Committee, Tomoko Tamura, a member of the opposition Japanese Communist Party, called on the government to press the U.S. side to be more forthcoming on releasing details about infection.

Yutaka Arima, deputy director-general of the Foreign Ministry’s North American Affairs Bureau, stated that the U.S. military in Japan was providing information in accordance with guidelines agreed to by the two nations.

The situation in other countries that also host U.S. military bases is vastly different.

For example, the U.S. military in South Korea releases information about anyone connected with the military who has been confirmed with COVID-19.

The first case was announced Feb. 24 when a 61-year-old family member of a U.S. military member living in Daegu was confirmed as being infected.

Since then, whenever any military personnel, family member or those working at U.S. bases are infected, information has been released over the internet about the individual’s position, age, gender and where they were just before being confirmed infected.

So far, information on about 70 individuals has been released. But more recently, personal information, such as age and gender, has been withheld.

On July 10, a U.S. Marine who had arrived in Australia two days earlier was confirmed to be infected. The government of the Northern Territory announced July 10 that the Marine was being quarantined at a public hospital in Darwin, the capital.

But Okinawa prefectural government officials say they have not received any information concerning the position and age of the infected U.S. military members or whether they reside on or off base.

“I hold a sense of crisis regarding infections within U.S. military bases," Okinawa Governor Denny Tamaki told the July 13 Okinawa prefectural assembly session. "I will continue to call for a system that provides us with information so local residents do not become worried.”

Tamaki plans to fly to Tokyo on July 15 to press central government officials to implement measures for greater release of information.

(This article was written by Shinichi Fujiwara and Tsukasa Kimura in Naha, Hideki Kitami in Tokyo, Takuya Suzuki in Seoul and Tetsuo Kogure in Sydney.)