Japanese who work at Sasebo base object to shift change plan 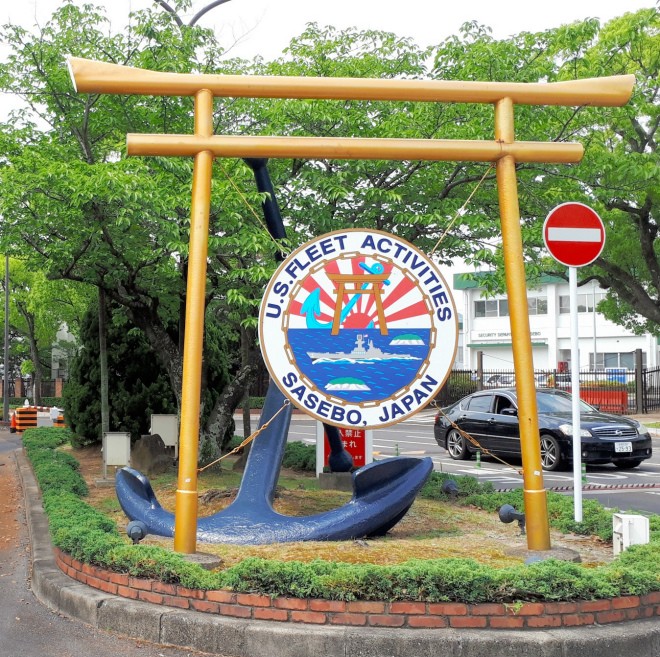 The main gate to U.S. Fleet Activities Sasebo base in Nagasaki Prefecture

SASEBO, Nagasaki Prefecture--A labor union of Japanese workers at the U.S. Fleet Activities Sasebo base here is seeking a retraction of what it views as an arbitrary proposed change in working hours for security personnel that would mean longer shifts.

Japanese security workers are currently assigned to one of three eight-hour shifts daily. But under the new plan, there will be two shifts of 12 hours each.

Labor union officials contend the change is detrimental to the interests of those who would be affected, and as such, a prior agreement between labor and management was required. Going ahead with the change without such an agreement violates Japanese labor laws, union officials stated.

About 1,750 Japanese employees work at U.S. Fleet Activities Sasebo base, and 80 or so handle security.

Japanese workers at U.S. military bases are formally hired by the Defense Ministry, but actual employment conditions are set by the U.S. military.

Article 12 of the Japan-U.S. Status of Forces Agreement (SOFA) states that the conditions for protecting Japanese workers at U.S. military bases and the rights of those individuals must be in line with Japanese labor laws. But another provision makes an exemption when the two nations have reached a different agreement.

The two nations have signed a basic labor contract that sets out the terms of working conditions.

U.S. military officials have consistently argued that the basic labor contract represented the “different agreement” exempting Japanese labor laws from applying to workers at the bases, according to officials of the All Japan Garrison Forces Labor Union.

Under Japan’s Labor Standards Law, labor and management must enter into an agreement when employees work beyond the legally established limits of eight hours a day and 40 hours a week. But no such agreement has been reached with Japanese workers at U.S. military bases.

The Labor Contracts Law calls for negotiations between labor and management whenever a change is made in working conditions that is detrimental to employees. The Sasebo labor union claims that unilaterally changing work shifts to 12-hour stretches constitutes such a detrimental change and, therefore, is another violation of a labor law.

Base officials insisted July 13 that labor laws were being followed. However, they said the planned July 15 change in work shifts had been pushed back to Aug. 1.

Kibihiko Haruta, a professor of labor law at Okinawa University who is knowledgeable about issues involving Japanese workers at U.S. military bases, said the U.S. military was trying to use what only is a contract to overturn the spirit of the Status of Forces Agreement, an international treaty.

“The condition of Japanese base workers not being covered by domestic labor laws and not being protected by those laws needs to be corrected,” Haruta said.