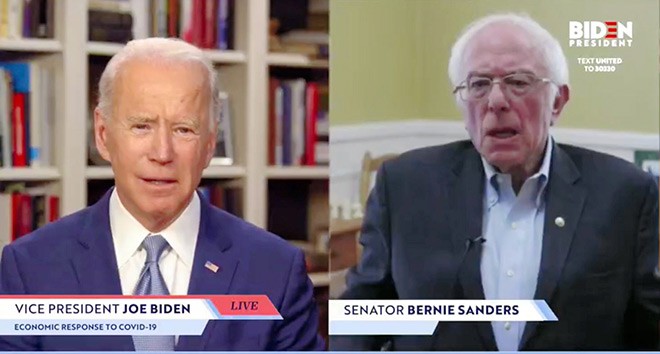 Members of the Diet’s opposition bloc have formed a progressive, cross-party caucus aimed at working with the left wing of the U.S. Democratic Party on the question of U.S. military bases in Japan and environmental issues.

The Japanese version of the Congressional Progressive Caucus (CPC) is expected to hold an online meeting with Democratic Party CPC members this month--the arm of the party that includes the likes of U.S. Senator Bernie Sanders.

About 40 Japanese lawmakers joined the newly formed caucus, which had its inaugural meeting last month.

The new caucus said it is essential to promote alignment and solidarity among moderate and liberal legislators championing policies aimed at achieving economic and social prosperity for all members of the public.

The group plans to introduce ideas from the Democratic Party and learn from their activities, as the Democrats prepare for the U.S. presidential election in November.

The Japanese CPC is chaired by Masaharu Nakagawa, a member of the main opposition Constitutional Democratic Party of Japan (CDP), and former education minister.

Mizuho Fukushima, head of the Social Democratic Party, and Kazuhiro Haraguchi, DPP chief of the Diet Affairs Committee, are also among members of the new caucus.

Left-leaning lawmakers in the U.S. Congress have led debate over policy measures in recent years in support of the federal government creating a system for national health insurance, and raising taxes for big businesses and the super-rich.

Their presence has been growing within the Democratic Party, approaching the size of the party’s mainstream faction.

“We share the same goal of equitably distributing wealth and expanding the middle class,” said a senior member of the Japanese CPC.

The caucus will tackle issues including U.S. bases, renewable energy, poverty and the wealth gap.

It also seeks to collaborate with the Democrats over the planned relocation of U.S. Marine Corps Air Station Futenma within Okinawa Prefecture, a Japanese government project staunchly opposed by Okinawans.