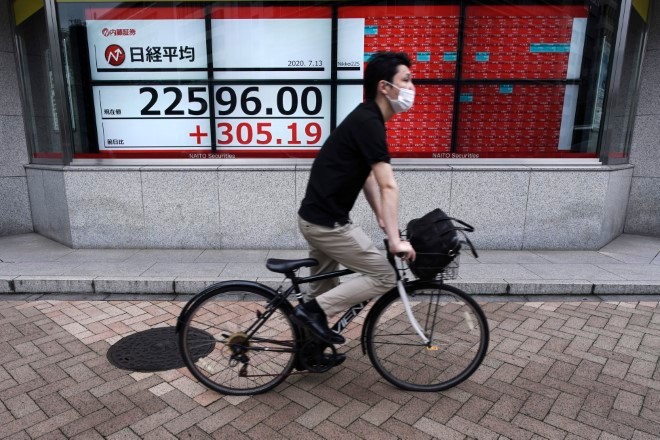 A man wearing a face mask to help curb the spread of the coronavirus rides a bicycle near an electronic stock board showing Japan’s Nikkei 225 index at a securities firm in Tokyo on July 13. (AP Photo)

SYDNEY--Asian shares jumped on Wednesday as optimism about a coronavirus vaccine bolstered risk appetite while the euro rose to a four-month top on the prospect of stimulus ahead of a crucial EU summit.

Japan’s Nikkei added 1.5 percent to the highest since June 10 while Australia’s benchmark index was up 1 percent. Chinese shares gained modestly with the blue-chip CSI300 index ticking up 0.3 percent.

Risk appetite was boosted by Moderna Inc.’s experimental vaccine for COVID-19 which showed it was safe and provoked immune responses in all 45 healthy volunteers in an ongoing early-stage study.

On Tuesday, the Dow Jones Industrial Average rose over 2 percent, while the S&P 500 gained 1.34 percent and the Nasdaq Composite climbed 0.94 percent.

“... the vaccine is more than a show stopper. It’s the ultimate recession stopper,” said Stephen Innes, markets strategist at AxiCorp.

The stock surge came despite lingering bad news about the coronavirus and after three U.S. states reported new record daily deaths from the pandemic, while tensions continued to grow between the United States and China.

“Although a mismatch between financial markets and the real economy remains in full effect, the removal of a single recessionary input (the virus) via a vaccine can pave the way for fast economic recovery,” Innes added.

“So, the positive news on the vaccine can go a long way to explain the dissonance between the shift in the stock market sentiment relative to the angst on Main Street.”

Simmering tensions between the United States and China also loom large, after U.S. President Donald Trump signed legislation and an executive order to hold China “accountable” for the national security law it imposed on Hong Kong.

The dollar was on the defensive, particularly against risk-sensitive currencies, following news of progress in vaccine development.

The single currency has been helped by hopes the European Union could agree at its summit later this week on a rescue financing package that will limit the economic damage to the bloc from the coronavirus pandemic.

The euro’s strength helped to push the dollar index to 96.056, a one-month low.

The yen was little moved at 107.27 per dollar, off a two-week high of 106.635 ahead of the Bank of Japan’s policy announcement later in the day where it is expected to keep monetary policy steady.

There were still signs of wariness among investors, as yields on leading U.S. and euro zone government debt fell and safe-haven gold prices solidified gains above $1,800 an ounce.