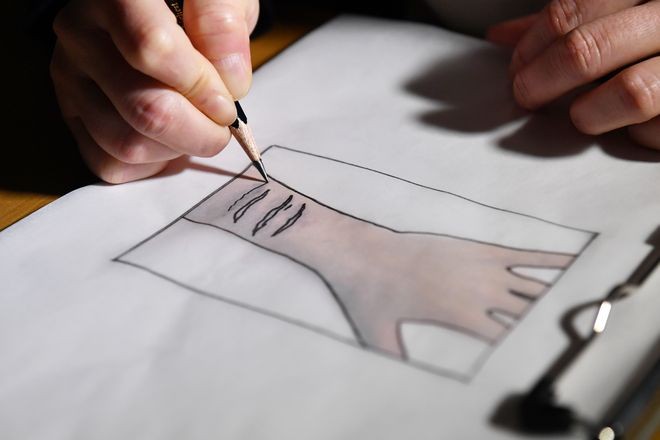 Kana Takahashi, an assistant to public prosecutors, puts tracing paper on a photo of “wounds” and traces them using a pencil. (Sayuri Ide)

To ease the psychological burden of citizen judges, simple sketches of dead bodies and injuries instead of photos are now routinely introduced as evidence in court.

But the practice poses challenges of ensuring a fair trial as some prosecutors, victims and their families said they want lay judges to see the actual injuries inflicted by the defendants. They say this gives the judges a clearer picture of crime scenes.

In February, The Asahi Shimbun asked Kana Takahashi, 45, who was an assistant until being transferred to another department in April, to make such a sketch after obtaining the public prosecutors office's permission.

A reporter put a store-bought seal that imitates gaping wounds onto the wrist and took a photo of it as a source material for a sketch.

Takahashi put tracing paper on the photo and traced the edge of the wounds several millimeters at a time using a pencil. She carefully re-created the wounds without drawing the dark red internal bleeding surrounding the wounds “to make the cuts clearer.”

Takahashi was assigned to the trial support department in April 2018. She had previously provided support for prosecutors’ investigations and never received specialized training in art.

By consulting with prosecutors, she tried various ways of presenting evidence, such as changing the color of photos or drawing sketches, in accordance with the prosecutors’ case.

“Lightening the color of a picture makes it difficult to tell how deep the wound is,” said Takahashi. “The more you modify the photo, the less information it can provide. I’m always facing a dilemma that the more severe the injuries a victim suffered, the more modifications I have to make to the picture.”

She said she once had to draw only red straight lines on a model of the human body to illustrate knife wounds and was surprised at the extent of modifications she needed to make.

Takahashi regretted when she could not fully respect the wishes of a bereaved family attending a trial who said they want citizen judges to look at photos of what their loved one suffered through.

“Details of wounds are important since many lay judge trials handle cases with serious injuries,” she said. “To be honest, I want citizen judges to see the actual pictures. If possible, I want to add only the minimum amount of modifications to them.”

How to show graphic evidence to lay judges has long been a challenge since the lay judge system started in the country in 2009. Although vivid photos had been presented in court with few modifications, one lawsuit prompted legal experts to more seriously think about the handling of such evidence.

In 2013, a woman sued the state for damages for causing acute stress disorder by showing her pictures of dead bodies as evidence during a trial at the Koriyama branch of the Fukushima District Court where she served as a citizen judge.

She lost the suit since the court ruled that the pictures were necessary evidence to prove the guilt of the accused.

Sources within courts said since around that time, courts have started considering modifying graphic evidence during a pretrial conference procedure, taking into account that some lay judges may be traumatized by the direct presentation of such evidence.

During the procedure, prosecutors and defense lawyers discuss which evidence they should present and which arguments they need to focus on during the trial.

Those assistants sometimes have to make modifications a couple of times when court judges reject their sketches and order them “to make them less disturbing.”

VICTIMS, THEIR FAMILIES DISSATISFIED WITH SKETCHES

Some crime victims and their families disagreed with adding such modifications to photos and presenting them as evidence.

In a trial over the murder of two junior high school students in Neyagawa, Osaka Prefecture, held at the Osaka District Court in 2018, bereaved family members took issue with sketches of the bodies at the time of their discovery offered as evidence instead of pictures.

“We wanted lay judges to see the actual photos,” said one family member.

Citizen judges reacted differently to graphic evidence they were presented with.

In February, parents stood trial at the Osaka District Court on charges of confining their daughter to a tiny chamber of a prefabricated hut in Neyagawa, resulting in her death. In an unusual move, prosecutors showed lay judges photos of the dead body to prove the accused's guilt.

The court approved the prosecutors’ request that such photos be introduced in court as evidence. They argued they were necessary to give citizen judges a clear picture of circumstances when she was found dead since the central dispute was over whether she was confined to or recuperating in the chamber.

Some lay judges who talked to reporters after the ruling said the pictures gave them a clear idea of what conditions the daughter was forced to endure. Other citizen judges, however, complained about the psychological stress induced from seeing the photos, saying, “To be honest, it was hard for me to look at such horrible pictures” or “They were unbearable to see.”

One court judge said prosecutors can obtain more detailed evidence of horrific crimes thanks to the wider use of security cameras and the development of advanced communication equipment.

“I’m trying to present such evidence in a less stressful manner to hear various opinions from citizen judges,” said the judge.

Lawyer Masanori Hatoko formerly served as a judge in criminal trials, including those under the lay judge system.

“Citizen judges can understand why they needed to see graphic evidence if the court gives them time to discuss the evidence they were presented with,” Hatoko said. “It’s important to give consideration to lay judges’ feelings so that they do not need to suffer alone from the shock they feel by seeing such evidence.”

(This article was written by Chinami Tajika, Takuji Hosomi and Yuto Yoneda.)