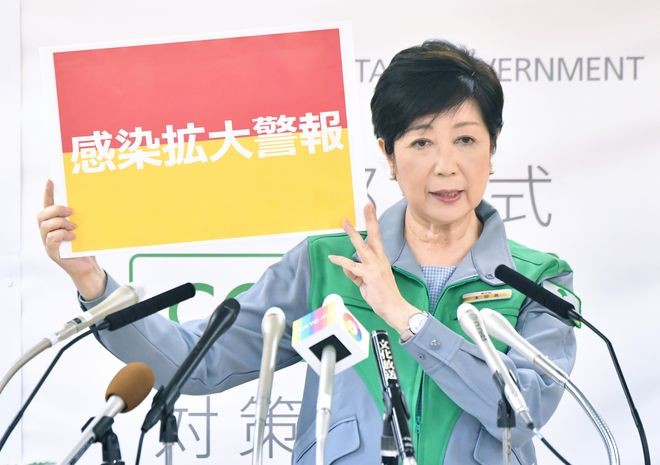 Tokyo Governor Yuriko Koike holds up a sign urging local residents to be vigilant against the spread of COVID-19 infections during a July 15 news conference. (Takuya Isayama)

The Tokyo metropolitan government raised its alert for the novel coronavirus pandemic to the highest level of four as new infections exceeded 100 for the seventh straight day on July 15.

A panel of experts set up by the metropolitan government who met the same day to assess the situation insisted that the alert level be raised.

The decision was based on a steady rise in infections in the capital over the past week and a realization that greater efforts are needed to prevent a further spread of COVID-19 cases.

The situation now facing Tokyo is vastly different from the first wave recorded from March until the state of emergency was lifted in late May, Norio Omagari, director of the Disease Control and Prevention Center under the National Center for Global Health and Medicine, told the July 15 monitoring committee meeting. Omagari is a member of the metropolitan government’s panel of experts.

“There are major differences in the affected age groups, the rate at which individuals develop serious symptoms and in the specific characteristics of the infected individuals,” Omagari said.

With regard to raising the alert to the highest level, Omagari explained that the average number of untraceable infection routes had close to doubled in the most recent week.

If that trend continued for four straight weeks, the number would increase by 16-fold, meaning there would be about 1,200 new cases daily that were untraceable.

The alert level for the medical care structure was maintained at the second highest level because there was no major increase in patients who developed serious symptoms.

Sources in the metropolitan government said there were 165 new infections on July 15.

The daily average of new infections for the week ending July 14 was 173.7, which was greater than the 167 daily average reached on April 14 when Tokyo was under a state of emergency over the pandemic.