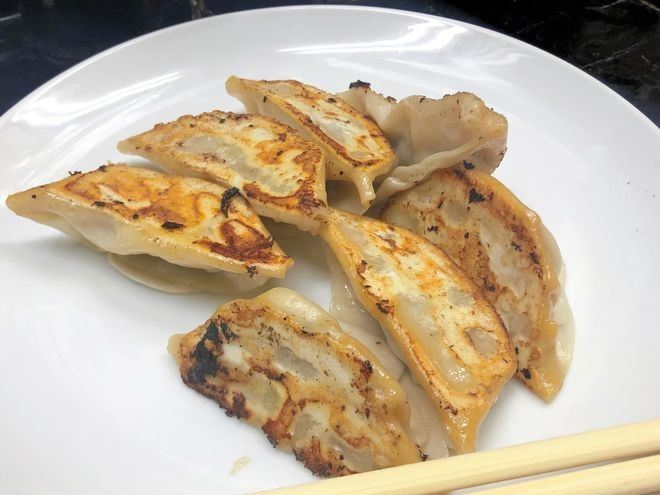 KOBE--It was a real hole in the wall, packed in among shops and eateries along a railroad underpass here, almost like the eatery's beloved offering stuffed into a thin dough.

Its menu contained nothing but the specialty, Kobe-style gyoza dumplings.

While Kobe is renowned for its premium beef and sophisticated sweets, for regular folk, the port city is known for its pan-fried dumplings, especially the ones served at Hyotan.

On June 21, Hyotan out of the blue announced its closure after 63 years in business on its Instagram account.

The last day for its Motomachi location was June 16, followed by the closure of the Sannomiya outlet on June 20.

The sad news immediately put many residents and gyoza lovers nationwide in mourning, leaving them with insatiable cravings for the juicy addictive pot sticker.

One such fan, Takayuki Inoue, 45, made a visit to Hyotan’s Motomachi location near JR Motomachi Station to reminisce.

“They made nothing but gyoza and I loved that,” said the company employee of Takasago, Hyogo Prefecture, while standing in front of the closed shutters that displayed a thank-you and goodbye notice from the owner.

“Everybody loved this place. There is nothing we can do about the closure, but I feel so sad,” he said.

A woman in her 50s living in Akashi in the prefecture wanted to take one last look at her favorite eatery.

“When I was little, my parents took me to Kobe for shopping. Every time we stopped by Hyotan to buy piping hot gyoza fresh from the grill to go. It was the most delightful thing for me back then,” she said.

Hyotan opened in 1957 in Motomachi, the central part of the port town.

Much of Kobe was destroyed in air raids during World War II.

The owner, who had just returned from Manchuria, started serving hearty dumplings to the city still rebuilding from the wartime devastation.

The style is often likened to a marriage of Japanese and Chinese culinary cultures and has become a fixture of cosmopolitan Kobe.

Naturally, the city has become a battlefield for Kobe-style gyoza with many specialty restaurants in business in the Motomachi and Sannomiya areas.

But Hyotan was the "standard," which locals flocked to after work.

Its Motomachi location had only eight seats at a counter, but tourists patiently waited to squeeze into the narrow confines.

There was no menu, but one was not needed. Frequent customers would just say, “gyoza for two,” which means 14 dumplings.

Hyotan was closed during the nationwide state of emergency issued to deal with the novel coronavirus pandemic.

Both locations opened for dine-in after the restriction was eased.

But an elderly staffer who was in charge of making gyoza became ill, forcing the current owner to make the difficult decision to close.

“People loved us for 63 years. I have nothing but appreciation for them. Thank you so much for such a long time,” the owner said.

One summed up the sentiment of many: “It was the best gyoza ever. Thank you!”

Many celebrities loved the place, too.

Veteran soccer star Kazuyoshi Miura, known as "King Kazu," was one of them.

“Hyotan has done a lot for me since my days with Vissel Kobe. I am very grateful for that,” said Miura, who currently plays for Yokohama FC as the oldest J.League player ever at age 53.

Although Hyotan only served gyoza, along with beer and drinks, Miura made a special request and was granted special permission.

“They allowed me to bring in rice,” he recalled. “Eating rice accompanied by their gyoza is a pleasant memory I still cherish.”

Miura said his favorite way of eating gyoza was to dip it in Hyotan’s garlic-infused soy sauce.

“I am so bummed that I won’t be able to enjoy Hyotan’s gyoza anymore," he said. "I loved the taste as much as the ambience that hasn’t changed from the old days.

"Thank you for gifting tasty gyoza and amazing memories to so many of us for such a long time.”