VOX POPULI: Widow alleges husband was driven to suicide by loyalty to Abe 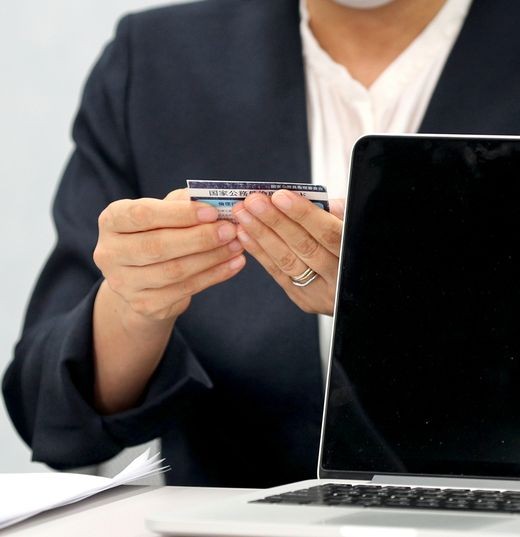 Masako Akagi reads out lines from "ethics checklist cards" for civil servants, which her husband, Toshio, kept in his notebook, at a news conference after the first court hearing in Osaka on July 15. (The Asahi Shimbun)

"I was ordered to do something that could blow the Cabinet apart," Toshio Akagi confided to his wife. "And it's always us flunkies who end up taking the heat."

Akagi was an official of the Finance Ministry's Kinki Local Finance Bureau when he was forced to falsify official documents about a shady land deal with Moritomo Gakuen, a private school operator with personal ties to Prime Minister Shinzo Abe and his wife.

Akagi killed himself in March 2018 while the Moritomo Gakuen scandal raged.

A trial began on July 15 at the Osaka District Court, where his widow, Masako, had filed a damages suit in an effort to uncover the truth about her husband's death.

Ever proud of his profession as a civil servant, Akagi's motto was, "My employers are the Japanese people." He graduated from university while working for the now-defunct Japanese National Railways.

Three years ago, his professional pride was shattered when his boss ordered him to rewrite an official document to ensure its contents did not contradict statements government officials made before the Diet.

Akagi's tearful protests were brushed aside by his boss who was ordered by higher-ups at the Finance Ministry. Disobeying the order was not an option.

According to a colleague of mine who covered the first day of the trial, Masako struggled to control her trembling voice.

"My husband regretted falsifying the documents," she stated. "And I hope no other civil servant will ever be driven to suicide."

Masako also noted that when she was getting ready to go to work on the morning of his death, he said to her, "Thank you."

This reminded me of the historical novel "Higurashi no Ki" (An evening cicada chronicle) by Rin Hamuro (1951-2017). The protagonist is a feudal retainer of impeccable integrity who is unjustly tried and ordered to commit "seppuku" (ritual self-disembowelment) 10 years later.

But his wife trusts him implicitly, and the couple continue to love and care for each other right up to the morning of his suicide.

The cruelty of the bureaucracy toward its hard-working "fringe members" appears to be timeless and universal.

At a post-trial news conference, Masako read out lines from the "ethics checklist cards" for civil servants, which her husband kept in his notebook.

"Are you fulfilling your professional duties rightfully?" went one line. Another asked, "Could you possibly be doing something that may arouse suspicion or mistrust?"

I must ask this of ranking bureaucrats of central government ministries and agencies who drive regional rank-and-file officials so ruthlessly: Are you not straying from the true path of public service?