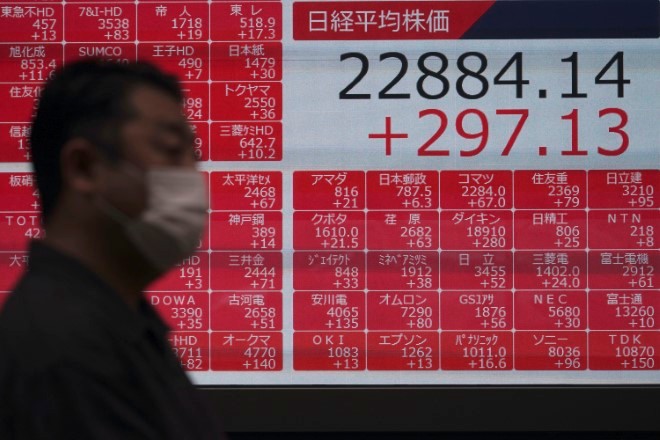 A man walks past an electronic stock board showing Japan’s Nikkei 225 index at a securities firm in Tokyo on July 15. (AP Photo)

NEW YORK--Wall Street is rising on Wednesday with hopes for a COVID-19 vaccine.

Investors see a vaccine as the best way for the economy and human life to get back to normal, and researchers said late Tuesday that one developed by the National Institutes of Health and Moderna revved up people’s immune systems in early testing, as hoped. The S&P 500 was 0.7 percent higher in its first day of trading since the announcement, after being up as much as 1.3 percent during the morning.

The vast majority of stocks across the market remained higher despite the loss of momentum in midday trading, with more than four up for every one down. The Russell 2000 index of small-cap stocks jumped 3.1 percent, an indication of rising expectations for the economy. Stocks across Europe and much of Asia also climbed.

Moderna itself rose 6.5 percent, and the S&P 500 is back within 5 percent of its record after touching its highest level since February during the morning.

Companies that would benefit most from a return to normal life led the way, such as those that sell tickets for cruises, flights and concerts. Winners of the stay-at-home economy created by quarantines and lockdowns, meanwhile, lagged behind. Clorox and Netflix both fell.

Of course, the stock market has made other big jumps recently following encouraging data on other potential vaccines or treatments, only to fall back again as coronavirus counts keep climbing. Nearly two dozen possible COVID-19 vaccines are in various stages of human testing around the world, all of which still need to prove themselves.

On Wednesday, as Wall Street was losing its stride, Florida said it passed the 300,000 mark for confirmed coronavirus cases and announced another daily death toll of more than 100. Oklahoma’s governor, meanwhile, said he tested positive for the coronavirus.

They’re the latest announcements to add to worries that worsening coronavirus trends across the U.S. South and West could snuff out the budding economic recovery that just got under way. The stock market has been largely churning in place for weeks, often swinging sharply within a single day, due to such concerns.

“People should be thinking about a balance of optimism and realism,” said Nela Richardson, investment strategist at Edward Jones.

She said there is a “long climb” to go for the economy’s reopening and pointed to other risks for the market, including U.S. trade tensions with China.

“We think it’s going to be a pretty bumpy road ahead,” she said.

Worries also remain high that the stock market has gone overboard in its rally: It has taken only months for the S&P 500 to nearly return to its record, when it could take years for the economy and corporate profits to get back to where they were before the pandemic struck. Less than four months ago, the S&P 500 was down nearly 34 percent from its record.

Markets nevertheless climbed Wednesday, bolstered by the optimism about a possible vaccine and encouraging reports on the economy and corporate earnings.

The nation’s industrial production improved more in June than economists expected. So did manufacturing activity in New York state earlier this month.

Goldman Sachs rose 1 percent after it reported much stronger results than analysts expected. Financial stocks in general did well, with those in the S&P 500 up 1.4 percent.

Other areas of the market where profits are closely tied to the strength of the economy were also particularly strong.

Industrial stocks rose 2.4 percent for the biggest gain among the 11 sectors that make up the S&P 500. They included a 3.7 percent rise for General Electric and a 6 percent jump for Southwest Airlines.

Royal Caribbean Cruises leaped 18.1 percent for one of the largest gains in the S&P 500, leading a group of stocks that stand to gain if shoppers and travelers get back to life as it was before the pandemic. Live Nation Entertainment rose 8.7 percent, Gap jumped 9.6 percent and Hilton Worldwide added 8.3 percent.

The yield on the 10-year Treasury rose to 0.62 percent from 0.61 percent late Tuesday. It tends to move with investors’ expectations for the economy and inflation.

In Asia, Tokyo’s Nikkei 225 advanced 1.6 percent after the Bank of Japan kept its ultra-easy monetary stance unchanged. It forecast that the economy would improve later in the year, assuming there is no major “second wave” of outbreaks of the new coronavirus.

Stocks in Shanghai slipped 1.6 percent after U.S. President Donald Trump signed a bill and executive order that he says will hold China accountable for its oppressive actions against the people of Hong Kong.

The legislation and order are part of an escalating diplomatic offensive against China that is adding to chronic tensions over trade and other issues.