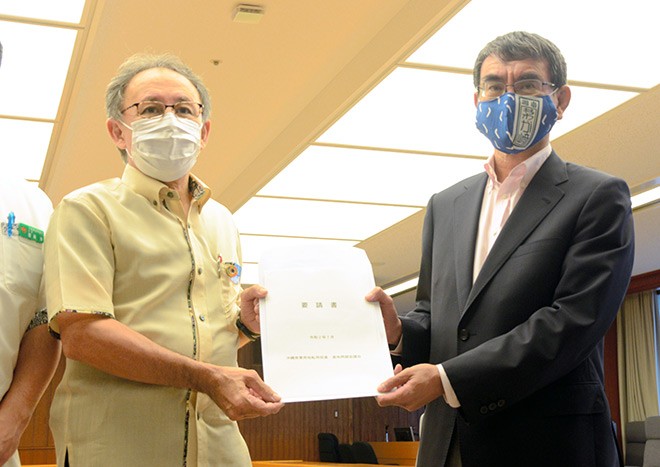 The Okinawa prefectural government on July 15 announced 36 new infections at Camp Hansen, located in the northern part of Okinawa’s main island. The report was followed by two additional cases at Futenma Air Station in Ginowan on July 16.

At least 22 of those reported newly infected at Camp Hansen visited a beach or went to commercial facilities outside the base, according to data showing their movements provided to the local government by the U.S. military.

On July 15, the Okinawa prefectural government and the U.S. military held their first working-level talks to share information. The talks had been requested by Okinawa Governor Denny Tamaki.

U.S. military officials told prefectural officials that all the newly infected personnel had mild symptoms or no symptoms, and that there have been no deaths.

On the same day, Tamaki traveled to Tokyo because he believes “the central government does not share his sense of crisis” over the rising infections at U.S. bases in Okinawa.

Tamaki delivered a letter to Foreign Minister Toshimitsu Motegi and Defense Minister Taro Kono that contained a written request asking the U.S. military to promptly provide Okinawa authorities with information on the status of infections at its bases.