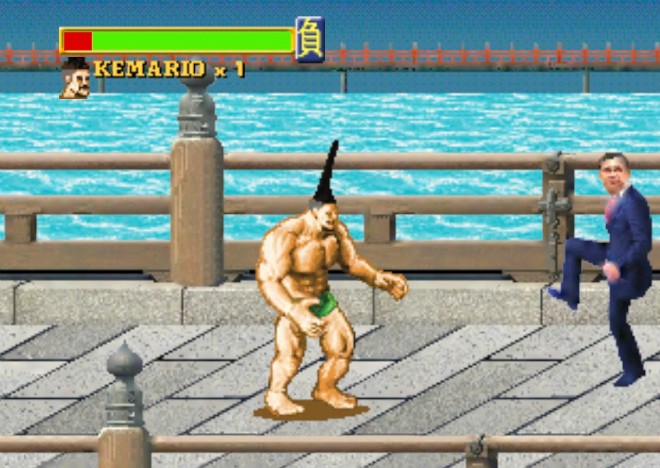 The protagonist, center, gains greater power by consuming bread and fights the Uji mayor controlled by the enemy on the Ujibashi bridge. (Provided by Uji city)

The publicly funded game allows players to control an aristocrat from the Heian Period (794-1185) to get the better of enemies in a local tea field and at temples.

It is designed to remind adults who grew up in the 1980s and 1990s of the games they enjoyed in their youth.

“The video game will make those in their 30s to 40s with small children feel nostalgic,” said Uji Mayor Tadashi Yamamoto. “I expect that players will feel like going to or living in Uji.”

The free smartphone app is a side-scroller titled “Uji-shi: Ujicha to Genji Monogatari no Machi” (Uji city: Town of Uji tea and The Tale of Genji), a somewhat atypical title for an action game.

In the game, the protagonist, named Kemario, after “kemari” (ball kick game) and “o” (man), challenges the evil king who invades Uji.

The character’s name and game settings may seem similar to some older, classic cartridge games, but the locales featured in the app are distinct.

Players fight enemies modeled after tea plants and other local specialties by kicking and jumping.

The action takes place at locations such as Manpukuji temple of the Obaku Zen sect, founded by Ingen Zenji (1592-1673), who introduced the early form of the “mokugyo” wood block to Japan from China, as well as Mimurotoji temple, which is well known for its magnificent hydrangea flowers, and Ujibashi bridge.

Traversing those areas, players learn about sightseeing spots in Uji, which is featured in “The Tale of Genji.”

The app comes with a minigame where the player has to sort high-quality tea at Byodoin temple, a World Heritage site. Another feature enables users to visit actual spots in Uji for special stamps.

The most prominent characteristic of the game is its look. It has retro-inspired, rough pixel graphics on which the character moves just a little awkwardly.

Developing a smartphone game typically requires a big budget, often costing hundreds of millions of yen. But Uji city’s app only cost up to 10.83 million yen ($101,000) to develop and roll out.

More than half of the budget, 6.34 million yen, was raised through crowdfunding. The municipality covered the remaining 4.49 million yen.

The city government unveiled a movie showing the video game’s development three years ago, which has now garnered more than 600,000 views.

One online commenter said, “All government officials should be this fun.”

Another said, “It seems nostalgic for the Famicom generation.”