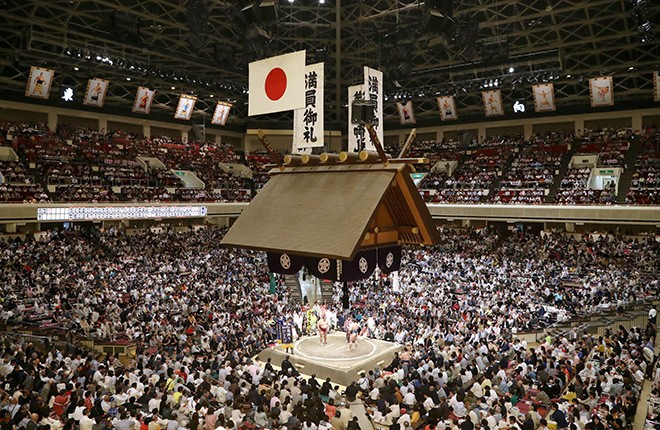 The sumo world has been shaken by another scandal. (Asahi Shimbun file photo)

A scandal has hit the sumo world days before the first tournament with spectators since January opens on July 19.

The Japan Sumo Association on July 13 said a stablemaster had repeatedly attacked his disciples physically and verbally.

The shocking revelations have underscored that the sumo world remains detached from the common sense of society.

The JSA announced the results of an investigation conducted by a compliance committee comprising experts.

The committee found that stablemaster Nakagawa, 54, a former makuuchi division wrestler known as Asahisato, repeatedly kicked and struck disciples for dozing off or making a mistake in luggage delivery.

Nakagawa also routinely hurled abuse at disciples, using such phrases as, “I will fire you” or “I will kill you,” according to the association.

What is baffling is the association’s punishment against Nakagawa.

His stable will be shut down and its wrestlers will be transferred to other stables. But Nakagawa will be allowed to remain in the association although he will be demoted from a committee member to the lowest position of toshiyori, a sumo elder.

The association was rocked in 2007 by the death of a trainee due to hazing. But the national sport has been struck by a series of scandals involving violence even after the incident. Breaking with this bad tradition is a key challenge for the association.

In 2017, the sumo world was dealt another heavy blow over yokozuna Harumafuji’s beating of another sumo wrestler during a drinking party. As the young wrestler was injured, Harumafuji was forced to retire prematurely.

In response to this incident, the association decided to mete out harsher punishment for stablemasters and high-ranking wrestlers over acts of violence.

In explaining the relatively lenient penalty against Nakagawa, the association cited the fact that the victims did not want him to be punished severely.

But the decision is inconsistent with the actions taken in similar cases in the past and could send the wrong message to audiences both within and outside the sumo world.

This problem far transcends acts of physical violence. Last year, a new law was enacted to crack down harder on so-called “power harassment,” bullying of people in weaker positions by those in positions of greater power. The Ministry of Health, Labor and Welfare announced guidelines for defining specific acts as power harassment.

In the world of professional soccer, the manager of J.League’s Shonan Bellmare resigned last autumn over power harassment allegations.

This is an era when people who have committed unreasonable acts against their subordinates by taking advantage of their superior positions are severely criticized and punished. The sumo association is too insensitive to this social trend.

That is not to say that the association has done nothing to address the problem. It has, for instance, organized lectures on the issue by experts for its members and wrestlers.

One fundamental challenge for the association seems to be the poor educational and coaching skills of some stablemasters. They are often clueless as to what to do when they cannot communicate effectively with young wrestlers.

Whether a sumo wrestler can become a stablemaster depends on his record in the sumo ring.

It should learn from other sports that have a licensing system for coaches and work with the educational community to tackle this challenge.

Six years ago, the sumo association was recognized by the government as a public service corporation eligible for tax breaks.

But it has yet to embark on serious reforms to deal with long-standing problems, including the system of quasi-stock ownership called “toshiyori meiseki,” which has been plagued by shady deals and vested interests.

The association, and the sumo world, will only fall into decline unless it enhances its commitment to keeping up with society.