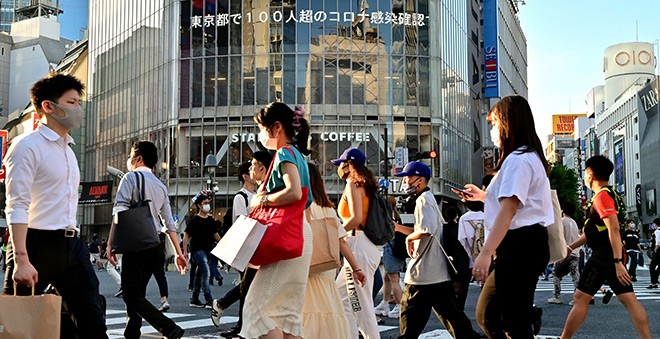 An electronic sign put up at the scramble crossing in Tokyo’s Shibuya Ward flashes a report on daily new infections of more than 100 in the capital on July 2. (Hiroyuki Yamamoto)

Every morning, two fax machines at a Tokyo metropolitan government office churn out reports that will be compiled into a highly-awaited number: the capital’s daily tally of new COVID-19 cases.

The reports are faxed to the metropolitan government’s task force on combatting infectious diseases from 31 public health centers in Tokyo.

The deadline for the faxes is 9 a.m. for the release of the new infection figure later in the day.

The public health centers fax an A-4 size sheet for each new patient. If a center registers 10 cases in its jurisdiction, it must send 10 separate reports to the task force.

The day’s tally of new COVID-19 cases reflects all reports sent to the task force between 9 a.m. the previous day and 9 a.m. that morning.

The deadline is set early to give officials time to compile reference numbers and prepare a press release for that day, according to a Tokyo official involved in the task.

The reference numbers include the average ratio of COVID-19 patients whose route of infection is unknown over a week, one of the gauges the metropolitan government uses to assess the spread of the disease.

After the 9 a.m. deadline, metropolitan officials ask public health center workers about the movement of the newly infected people and where they contracted the virus.

After these inquiries, the officials announce details on daily new cases, such as the number by age group and the routes of transmission, around 7 p.m. to 8 p.m.

But sometimes, the daily tally is rushed to Tokyo Governor Yuriko Koike and other senior officials in the morning.

That is why news outlets, including The Asahi Shimbun, TV broadcasters and digital media, can flash reports on the daily count in the afternoon after reporters gather information from those officials.

But the daily count does not reflect the number of infections confirmed during the most recent 24 hours.

There is a time lag of “about three days” between positive tests for the novel coronavirus and the metropolitan government’s announcement of those cases, an official explained.

When positive results of diagnostic or antigen tests are returned, the doctors in charge compile reports on the new cases and fax them to the public health center in their jurisdiction.

The reports include the name, address and symptoms developed by the individual whose infection was confirmed.

Public health center workers then must confirm the content of the reports and forward them to the metropolitan government’s task force. But first, the workers blacken out personal information on the patients as a precaution against mistakenly faxing the reports to the wrong place.

The entire process after the discovery of the positive test results until the release of new daily numbers takes about three days.

That time lag and the fact that the daily number announced is actually days’ old have raised suspicions by some on the internet that metropolitan officials may be manipulating the number of new COVID-19 cases.

Some Tokyo officials acknowledged that they could have done a better job of explaining to the public how the COVID-19 daily reports are compiled.

“We cannot blame them for raising doubts,” one official said. “We should have fully explained the process.”