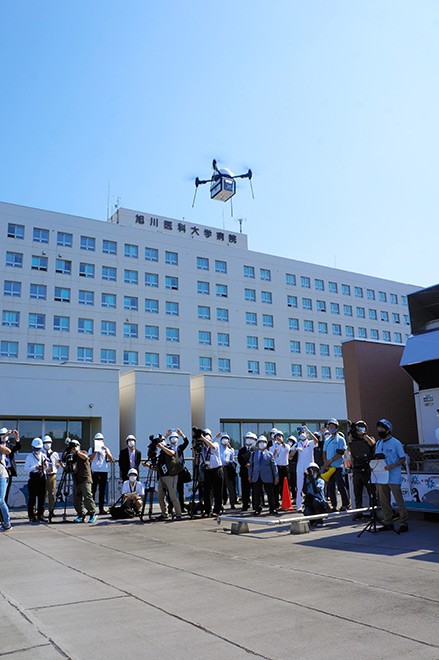 A drone carrying drugs flies from Asahikawa Medical University to a nursing home for the elderly, about 500 meters away, in Asahikawa, Hokkaido, on July 19. (Junichiro Nagasaki)

ASAHIKAWA, Hokkaido--In a first trial for Japan, a patient underwent a medical checkup followed by receiving a prescription by drone without requiring any in-person contact.

In a room close to a pharmacy located inside a building on the Asahikawa Medical University campus, a doctor conducts an online medical examination of a patient.

He asks questions such as, “Is your blood pressure stable?” on the computer screen. A pharmacist then gives the patient instructions, also via the internet, explaining how to take the prescribed medication.

The test on July 19 was conducted on the assumption that the patient is a diabetic man in his 80s.

Workers then attached a cooler containing insulin to a drone, which soon after flew off to the elder care nursing home where the man resides, about 500 meters from the university. Four minutes later, the drone arrived.

The result was a success. The patient had his full medical consultation done online and received his prescription without having to leave the building and risk coming into contact with the novel coronavirus.

The demonstration was the first such instance in Japan of a non-face-to-face integrated medical service that includes an exam and prescription delivery by drone, according to people involved with the project.

“This will lead to a decrease in the risk of infection, not only for patients but also for medical workers,” said Akitoshi Yoshida, president of Asahikawa Medical University.

Following the spread of the coronavirus, the central government moved in April to allow all kinds of sick patients to take their medical examinations online or via telephone if they obtain approval from their doctors.

The biggest challenge for the project is safety.

During the test, eight ANA officials operated the drone, monitoring for vehicle traffic and passers-by.

The government plans to relax certain drone regulations in fiscal 2022.

ANA aims to commercialize the project in rural and urban areas. It plans to run many safety tests and demonstrations.

(This article was written by Junichiro Nagasaki, Hiraku Toda and Naoyuki Himeno.)