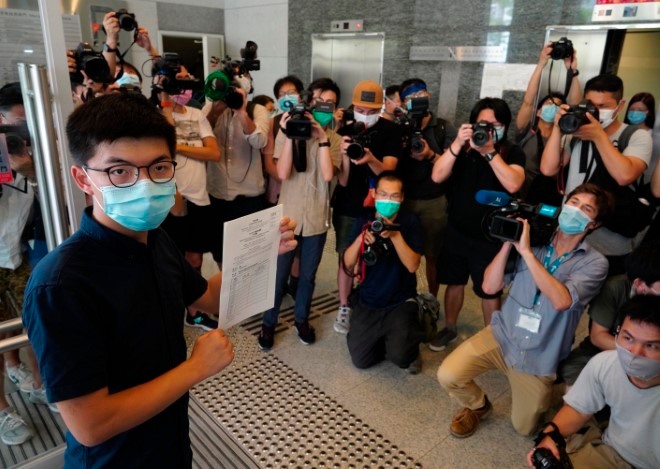 Hong Kong pro-democracy activist Joshua Wong poses for a picture with the nomination papers as he files his candidacy in Legislative Council elections due in September in Hong Kong on July 20. (AP Photo)

Wong was one of the top candidates emerging from unofficial primaries held by the pro-democracy camp as it aims to win a majority of seats in the 70-seat legislature in the September elections.

Critics of the national security law Beijing imposed on the semiautonomous territory on June 30 fear it may be used to thwart pro-democracy candidates.

The sweeping law bans secessionist, subversive and terrorist acts, as well as banning colluding with foreign forces to intervene in the city’s affairs. The law also states that anyone convicted of endangering national security will be disqualified from running in city elections or holding public office.

The 23-year-old Wong has been imprisoned twice for participating in 2014 pro-democracy protests. He also regularly speaks out against Beijing’s tightening control over the city and often meets with lawmakers and politicians from the United States and other countries.

“With the threat of being extradited to China, with the uncertainty of being sent to a black jail in Beijing, with the possibility of facing a life sentence … I still hope to run for office and receive people’s mandate, and let the world know that we will continue our fight until our last breath,” Wong said.

Law fled Hong Kong for the United Kingdom after the security law was enacted and has said he will continue advocating for democracy in Hong Kong while abroad.