Horyuji temple murals before 1949 fire to be shown online 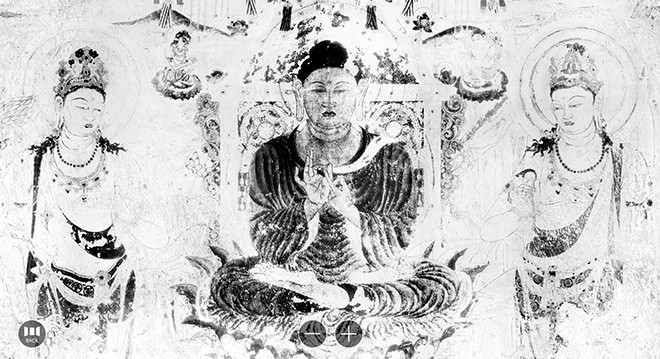 Digitized images of 363 original glass photographic plates showing seventh-century murals from Horyuji temple before they were damaged in a 1949 blaze will be available online from July 22.

The digitization of the plates, whose surface is coated with sensitive materials, was planned by the temple in Nara, a World Heritage site, the Nara National Museum and other organizations.

A portion of the digitized images were displayed at the Nara National Museum from December 2019 through January 2020.

The exhibition organizer decided in May to show the images online to inform the public about the historic and artistic values of the murals even under the government’s stay-at-home request at the time to contain the COVID-19 pandemic.

“The images are an important resource material that provides the original state of the murals before they were damaged in the fire,” said Shokaku Furuya, chief administrator of a Buddhist sect at Horyuji temple. “They will also serve as a useful research material as they give us a clearer picture of detailed elements. I want many people to become interested in the murals.”

Benrido Inc., a long-established art studio in Kyoto, used the plates to take 12 life-size pictures of the murals of the temple’s Kondo main hall in 1935 before they were scorched in the fire by dividing them into sections. The plates were designated as important cultural properties in 2015.

The large and small murals were painted in rich colors inside the hall between the late seventh century and the early eighth century and are considered among the treasures of ancient East Asian Buddhist paintings, which include murals of the Ajanta Caves of India and the Dunhuang Caves in China.

In 2015, the temple set up a committee to preserve and utilize the murals in cooperation with the Cultural Affairs Agency and The Asahi Shimbun. The committee started a project to repair and preserve the plates in 2016 and cleaned them and made boxes to preserve them, which was funded by the government.

The government and The Asahi Shimbun Foundation provided subsidies for the digitization of the plates, which began in May 2019. Benrido scanned the plates, and the museum joined the sections together with cooperation from the center for utilizing cultural assets.

A staff member said each completed image of a big mural has 30 gigapixels and 17 gigapixels for a small one.

The digitized images provide a magnified view, showing patterns and details of finely drawn lines on the murals that are not visible on the original glass photographic plates. In the digitized images, “rahotsu” tightly curled hair of an Amida Buddha and each strand of hair of a Buddhist saint can be clearly seen. The images also show shades of the saint’s eyebrows.

A research lab headed by Dr. Akihiko Takano at the National Institute of Informatics was involved in building a system needed for the online display of the images.

Kosei Taniguchi, who heads an education department of the Nara National Museum, said, “It’s unprecedented to digitize recorded data and show them online since we used to just repair cultural assets and preserve them. It’ll be a new way of making the most of cultural assets.”

The digitized images will be shown on the following special website from 2 p.m. on July 22: (https://horyuji-kondohekiga.jp/)