A video presentation shows Rikako Ikee on the road to recovery from leukemia, scenes from past Olympics, and medical care providers dealing with the novel coronavirus pandemic. (Video footage provided by Tokyo 2020 organizing committee and Tokyo metropolitan government) 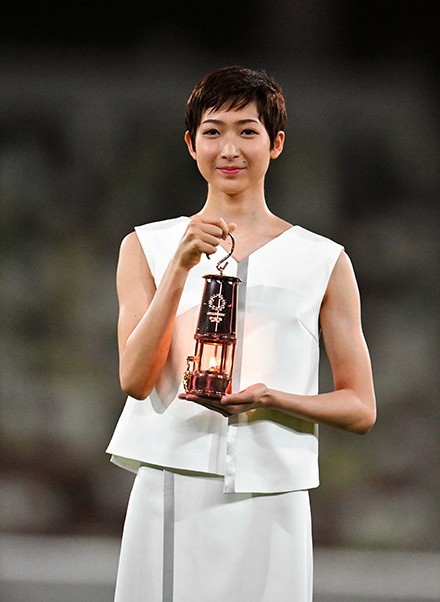 Swimmer and leukemia survivor Rikako Ikee stood alone on the National Stadium field and delivered a message to athletes around the world, hoping the Tokyo Olympics can be held next year.

“It would be so wonderful if the world in a year’s time was one that allowed for the holding of the Olympics and Paralympics,” Ikee said on July 23.

The Opening Ceremony of the Tokyo Olympics was originally scheduled for July 24, but the novel coronavirus pandemic pushed back the entire sporting event by about a year.

The ceremony held on July 23 was meant to mark one year before the Opening Ceremony. The stands of National Stadium were devoid of fans and any flashy production.

“I believe the sudden disappearance from before one’s eyes of a major goal led to an indescribable sense of loss for all athletes,” Ikee said. “I truly understand that feeling because I also came down with the major illness of leukemia. The future that we had envisioned changed into something completely different overnight. That was a very difficult experience.”

Ikee expressed her feelings of what she went through and what she hoped would transpire in a year’s time.

When she was diagnosed with leukemia in February 2019, she said she felt a huge sense of relief because she would not have to face the enormous pressure of doing well in the Tokyo Olympics.

In a three-minute video that was broadcast after her spoken message, Ikee also revealed that when she realized the Olympics would not be held, she understood just how much she loved swimming, in the same way that all athletes feel toward their own sport.

Ikee, 20, began training in May with her eyes set on the 2024 Olympics in Paris. Other athletes are also continuing with their own training despite the various limitations stemming from the novel coronavirus pandemic.

“We can make an effort with a positive attitude regardless of how difficult the training only when hope can be seen shining in the distance,” Ikee said. “In my case, I was able to overcome the difficult treatment because of my single-minded desire to return to the pool one day.”

She concluded her message with, “I hope that one year from today, in this place, the flame of hope will be shining.”