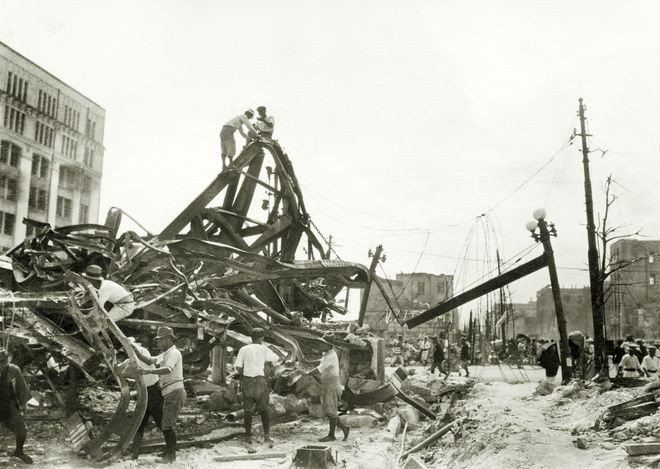 The Tokyo metropolitan government headed by Governor Yuriko Koike must stop providing effective help for groups trying to gloss over the past. Koike should realize that such a wrong-headed policy serves only to strangle the freedom of society and deepen public distrust of the administration.

For years, a citizens group has been organizing memorial service ceremonies in a park in the capital for Koreans and Chinese caught up in racist mob violence triggered by the 1923 Great Kanto Earthquake, which ravaged wide areas in the Tokyo metropolitan area and left more than 100,000 people dead. The capital’s government, which manages the park used for the ceremonies, has asked the group to submit a written pledge to prevent this year’s ceremony from resulting in any disturbance.

The group has been asked to promise to keep participants from taking any action that impedes the management of the park; to obey the metropolitan government’s order to discontinue the event in case the above-mentioned requirement is not observed; and not to complain if the use of the park is not permitted next year onward as a result of a broken pledge.

Why should this be an issue? Three years ago, an organization that denies there was a massacre of Koreans and Chinese following the disaster has been trying to disrupt the ceremonies. The organization held meetings it calls “spirit-consoling services for victims” at the time when the ceremonies took place and made loud speeches denouncing allegations of a massacre as a fabrication.

Last year, there was a clash between this organization and people protesting against its claims.

If a similar incident occurs this year, the memorial service ceremony may not be held from next year on.

A member of the organization that denies the massacre took place said in a blog post that the objective of its action is to ensure the ceremonies will not be permitted.

The metropolitan government’s request for a written pledge could effectively help this organization achieve its goal of whitewashing history.

The local autonomy law bans local governments from denying residents access to public facilities “unless there are justifiable reasons.” A Supreme Court ruling has also ruled against “ill-thought-out restrictions” on the use of public facilities by local residents.

The metropolitan government’s move is an excessive reaction to last year’s incident that fails to respect freedom of assembly and speech.

The local administration’s action surely reflects Koike’s stance on the issue. She has ended the tradition of sending a memorial address to the ceremony, which had been maintained by her predecessors. She has also made equivocal remarks about the massacre, saying there are “various views” about the matter.

But it is an undeniable fact that citizens as well as military and police officers killed many ethnic Koreans in wide areas following rumors that Koreans had started rioting or thrown poison into wells.

There are many public records and testimonies about the massacre. A report by the Cabinet Office’s Central Disaster Prevention Council clearly confirmed the killings.

Despite this, the organization denying the massacre insists that Koreans did riot and committed terrorist acts, and uses racist language to get its message across.

During her recent campaign that resulted in Koike being re-elected to a new term as governor, she cited the establishment of an ordinance to crack down on hate speech as one of her achievements during her first term.

If Koike is really committed to this ordinance, she should address this racist abuse, which has no basis in fact and should not be allowed to go unchecked.

The governor should set an example by sincerely acknowledging the dark chapter of the nation’s history and send a memorial address to the ceremony as the representative of Tokyo’s citizens.

Unfounded vicious rumors during natural disasters are not a thing of the past. In the wake of the 2011 Great East Japan Earthquake, rumors started circulating that groups of foreign thieves were on the prowl. The current coronavirus outbreak has also triggered unreasonable attacks on foreign nationals and people who have caught the virus.

What kind of abnormal behavior can social anxiety incite and what should be done during the normal times to prevent such acts in emergencies? We have much to learn from the horrific tragedy that occurred 97 years ago.

After friend’s violent death, artist pours his grief into manga