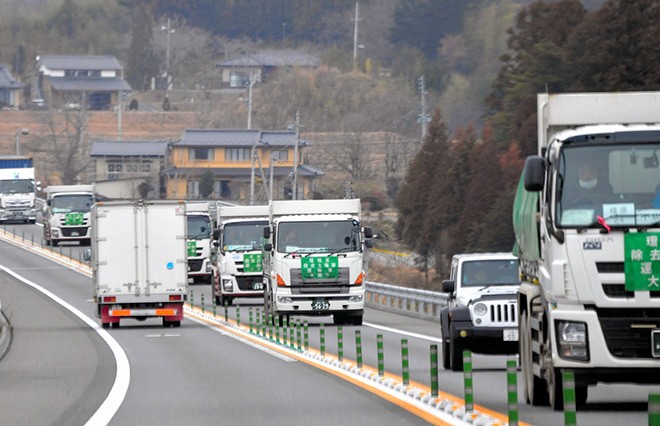 Subcontractors hired to rebuild the disaster-stricken Tohoku region created slush funds with taxpayer money to wine and dine and give cash to senior officials of four major construction companies, The Asahi Shimbun has learned.

The combined sum of the slush funds reached at least 160 million yen ($1.51 million), a result of padded bills paid for by revenue collected under a new tax levied for reconstruction projects in the region.

The four construction companies whose executives accepted the gifts from the subcontractors are Shimizu Corp., Hazama Ando Corp., Kajima Corp. and Taisei Corp. Together, they received more than 1 trillion yen worth of government contracts to rebuild the Tohoku region from the 2011 Great East Japan Earthquake, tsunami and Fukushima nuclear disaster.

The projects included disposal of the mountains of debris generated by the tsunami and rebuilding communities affected by the triple meltdown at the Fukushima No. 1 nuclear plant.

The subcontractors received orders from those four general contractors, inflated the costs of the work, and pooled the excess money into slush funds.

Cash gifts from the slush funds were presented to senior officials of those companies at their branches in the Tohoku region who had an influential say in selecting subcontractors and how the funds for the projects should be allocated.

The slush funds also covered parties at night clubs to entertain the executives and even paid for the cost of overseas trips.

The slush funds were uncovered by the Tokyo Regional Taxation Bureau, sources said.

An employee with a subcontractor said that on one occasion, the company was forced to shell out more than 1 million yen to cover the drinking expenses of a senior Kajima official at a high-end club.

The employee also said the subcontractor used the slush fund to buy an expensive watch that the Kajima official wanted to give to a hostess, and to pay for the expenses of his frequent trips to the Philippines.

A Tokyo company received a contract from Shimizu to clean up Okuma, a town co-hosting the crippled nuclear plant.

Shimizu overpaid the company for the work, allowing it to build a slush fund totaling tens of millions of yen.

On 10 occasions, the subcontractor used the slush fund to give a cash gift to a senior Shimizu official who oversaw the Okuma project. It also used the fund to entertain the official over dinner.

A Hazama Ando official in a similar high-level position is believed to have taken about 10 million yen from a slush fund of a subcontractor in connection with a project to dismantle buildings in Namie, Fukushima Prefecture.

The Tokyo Regional Taxation Bureau ordered the Shimizu subcontractor and Hazama Ando to pay back taxes and penalties for tax evasion, saying payments from the slush funds to their senior officials should have been declared as earnings.

After the slush funds came to light, the gift-receiving senior officials with Shimizu and Hazama Ando left their companies.

A company in Hyogo Prefecture that sells waste-disposal machinery accumulated a slush fund totaling 44 million yen from 2014 to 2015 through business transactions with another company. The two companies were involved in the tax-funded rebuilding projects in the Tohoku region.

The Hyogo company planned to use the slush fund to give money to senior officials with Taisei and Kajima.

Taisei was in charge of waste disposal in Kesennuma, Miyagi Prefecture, while Kajima oversaw a project to build a waste-processing facility in Tomioka, Fukushima Prefecture.

Multiple subcontractors involved in a reconstruction project in Miyako, Iwate Prefecture, pooled together about 100 million yen in a slush fund to provide favors to a senior Kajima official and other officials at the site and others.

Tax authorities in Osaka and Sendai are looking into the cases.

Asked by The Asahi Shimbun about allegations he received 10 million yen from a slush fund, the former Hazama Ando official said, “I cannot say anything other than the fact that I left the company.”

Shimizu acknowledged that the senior official in the field accepted excessive entertainment from the subcontractor. It said the official’s actions caused the company to lose money that should have been reported as profit.

“The official in question paid back the money he received (to Shimizu) and quit,” a Shimizu official said.

Taisei said the company does not provide details about deals with subcontractors.

Over eight years from 2011, more than 12 trillion yen in taxpayer money was spent on infrastructure projects to construct roads, embankments and housing in the disaster-hit region. In excess of 6 trillion yen in public money has been spent on rebuilding communities from the nuclear disaster.

The bulk of these funds came from revenue from the new tax to reconstruct Tohoku.

The construction industry, which had been battered by a sharp drop in public works projects, experienced a record boom with the Tohoku-related projects.