Seoul: No proof defector returned to North Korea with coronavirus 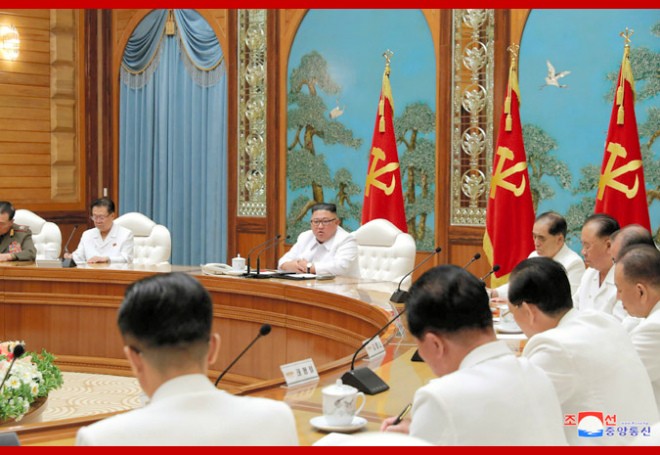 The North Korean Workers’ Party holds an emergency meeting on July 25. (From the website of the Korean Central News Agency)

SEOUL—Seoul disputed Pyongyang’s claim that a North Korean defector who slipped back into his home country is the first person infected with the novel coronavirus in the secluded nation.

A bag believed to have belonged to the man in his 20s was found on Ganghwa Island near the military boundary, the South Korean government said on July 27.

Inside the bag were receipts showing the man had exchanged South Korean won for U.S. dollars and a pair of swimming goggles, among other items.

South Korean defense and police authorities said the man used a drainage canal built underneath wire fences along the river to reach the mouth of the river. He then likely swam across the border and entered the city of Kaesong, they said.

According to the Korean Central News Agency, the man defected three years ago and returned to Kaesong on July 19.

North Korea had claimed that the country had zero COVID-19 patients. But state media recently reported the first suspected infection and pointed the finger at the former defector.

South Korea’s health ministry, however, said it cannot confirm if the North Korean man had been infected with the novel coronavirus.

It said he was not registered in the country’s epidemic prevention system as a person who has contracted the virus or a person who should self-quarantine.

Two people who had come in close contact with the former defector took polymerase chain reaction (PCR) tests, and the results were negative, the ministry said.

Dong Yong-sueng, secretary-general of a citizens group that is involved in inter-Korean cooperation projects, said North Korea’s reaction shows that it recognizes the vulnerability of its epidemic prevention system.

“The report indicates that there are actually people there infected with the virus,” Dong said.

North Korea has recently been on alert against the virus, and rumors are circulating among residents that people will be sent to detention centers if they walk on the streets without a mask, Dong said.

North Korea’s state media have been critical of its military units that failed to detect the re-entry of the man, but they have not specifically blamed South Korea for the infection case.

Other experts doubt that scenario, noting that Kim Yo Jong, Kim’s sister, and others have stated that North Korea should not deal with South Korea.

“It is hard to think that North Korea is seeking ways to reopen dialogue with South Korea over the matter,” a former North Korean official who defected said.

Surge in liquid marijuana use forces police to change tactics