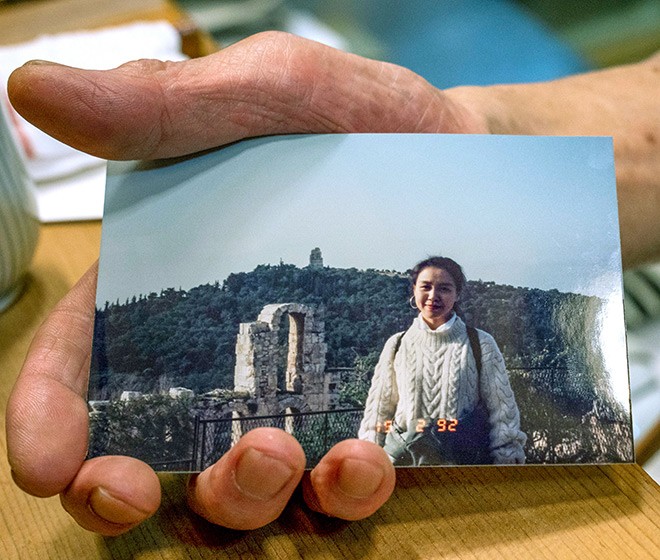 The father of Yuri Hayashi, an amyotrophic lateral sclerosis (ALS) patient who died in November, holds her picture in Kyoto on July 24. The photo was taken in 1992 before she developed the incurable disease. (Takuya Yamazaki)

Yoshikazu Okubo also likened himself to a manga character who gets paid for killing people upon their request, the sources said.

Okubo, 42, who runs a clinic in Natori, Miyagi Prefecture, and Naoki Yamamoto, 43, a doctor residing in Tokyo’s Minato Ward, are accused of murder by contract in the death of Yuri Hayashi, 51, an ALS patient who had expressed her desire to die in her blog.

Hayashi died on Nov. 30, 2019, after two men believed to be Okubo and Yamamoto visited her apartment in Kyoto’s Nakagyo Ward and administered a sedative that caused breathing problems.

About a week before her death, Hayashi transferred 1.3 million yen ($12,000) to Yamamoto’s bank account.

In May that year, an online bulletin board named “Euthanasia Study Group” was opened under an account believed to belong to Okubo.

The bulletin board’s stated purpose was “to share tidbits of tricks of letting patients die quietly.”

“We need to use our brains to keep (euthanasia) from being uncovered,” the moderator wrote.

ALS patients and their families posted their views of euthanasia as well as examples of cases that led to slower breathing.

But they were asked to avoid using such expressions as “murder by contract” and “assisted suicide” because those acts could breach the law.

In tweets under the same account name, admiration was repeatedly expressed for Dr. Kiriko in the famed manga “Black Jack” by Ozamu Tezuka.

In the manga, Kiriko, who commits mercy killings for money, has a showdown with the protagonist, Black Jack, an unlicensed but genius surgeon who does everything possible to save his patients whose odds of living are slim.

Okubo graduated from Hirosaki University’s medical department in Aomori Prefecture in 2003. He began working at a hospital in the Tohoku region after serving as a technical officer at the Ministry of Health, Labor and Welfare for several years.

In a tweet posted in 2013 while he was working at the hospital, he wrote: “I still want to become a Dr. Kiriko. I believe that society’s needs point to his direction.”

After he opened his own clinic in Natori in 2018, he said in one online message, “I want to make a living by visiting patients across the country and get paid on the spot.”

In another post, Okubo said, “The optimum solution for me would be serving as a wandering murderer like Kiriko, without relying on a particular facility.”

In April, a message he posted read: “I began offering the service of euthanasia. How much are you willing to pay for it?”

He conducted an online survey by providing four price options varying from 500,000 yen to 5 million yen.

Okubo and Hayashi became acquainted on social media about a year before her death, the sources said.

Hayashi said in her blog that she developed ALS in 2011.

(This article was written by Itsuki Soeda and Shun Yoshimura.)

Honda selling pink Super Cub in ‘Weathering With You’ film