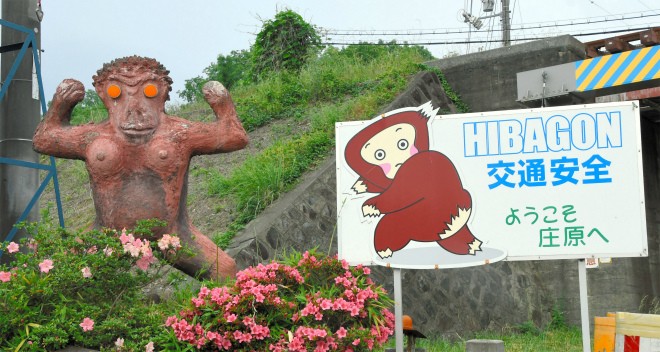 A statue of Hibagon and a signboard featuring a Hibagon character at a visitor center in Shobara, Hiroshima Prefecture (Kohei Higashitani)

SHOBARA, Hiroshima Prefecture—A nighttime drive on a mountain path half a century ago led to a legend that forever changed this community and could now be instrumental in its survival.

On the evening of July 20, 1970, a man in a pickup truck in Saijo, a northern town of Hiroshima Prefecture, came across a rather unsettling sight: an ape-like creature walking on a mountainside.

After word spread about the encounter, other locals came forward with their own reports of an animal walking upright.

Their descriptions were similar. The beast was around 1.6 meters tall, with a gorilla-like body and a face shaped like an inverted triangle.

The locals started calling the creature “Hibagon,” a reference to Hiba mountain in the town.

Did Japan have its own Bigfoot or Sasquatch, the missing link in the evolutionary chain between apes and humans?

News and entertainment media began flooding the small town surrounded by mountains to find out.

The locals’ lives were turned upside-down by the sudden attention. But that was only the beginning of “Hibagon fever.”

Saijo town, today’s Saijocho district in the city of Shobara in Hiroshima Prefecture, became inseparable from the creature.

Residents today still talk about the legend of Hibagon.

Seiko Fujikawa, 56, was a first-year elementary pupil when Hibagon fever took the town by storm.

Fujikawa recalls that when he and his fellow students walked home from school in a group, they often found themselves pestered by questions from adults.

“Have you seen any holes around here?” the grown-ups asked the children in hopes of finding a trace of Hibagon or its den.

Fujikawa said those days were surreal.

Some residents believed that Hibagon represented a symbol of disapproval for the huge recreational facilities under construction in the area, including camping grounds.

“The god of Hiba mountain sent Hibagon to haunt us,” one theory went.

But Fujikawa mentioned another less-spiritual school of thought.

According to a rumor, a gorilla had escaped from Asa Zoo in the city of Hiroshima, which is 90 km from Saijo.

“And I heard that’s Hibagon’s true identity,” Fujikawa said. “We were scared of Hibagon, but it was all in good fun. It’s a sweet memory, indeed.”

Katsuyuki Egi, 76, was a young employee at the Saijo town government office when he was called to the mayor’s office in August 1970.

It was right after a local newspaper, The Chugoku Shimbun, ran a story about a Hibagon sighting in the town.

“It’s good that (Hibagon) is making it to the newspapers but …,” the bewildered mayor said.

Hibagon fever was rising, and day and night, reporters hounded residents who said they had witnessed the beast. Some reporters even knocked on doors at night or trespassed on fields, interfering with farm work.

The townsfolk began grumbling about the intense and constant national attention on Saijo.

The Saijo government decided to create a post to handle the “issue of anthropoid apes.”

Egi was appointed to the position.

His work included interviewing people who reported seeing Hibagon and handling inquiries and requests from visiting media and student members of a university “exploring club.”

Egi was previously in charge of tax services, so the topic of “anthropoid apes” was completely out of his domain.

“But it was fun,” he said. “My job was kind of like a jack of all trades. Looking back, I’d say it was a once-in-a-lifetime experience.”

Back then, residents in some parts of the mountain town did not have access to television. Egi himself never watched TV until he graduated from high school.

His first job at the town government office, in fact, was to install TV antennas in the mountains.

Hibagon fever, which coincided with the high-growth period of the postwar Japanese economy, spread the use of televisions in Saijo.

Residents became glued to the tube, and started enjoying the fame again, exclaiming, for example, “My neighbor was on TV!”

The town government in the meantime came up with a unique policy to pay 5,000 yen ($48) for each resident who spotted the creature. The money was to “make up for inconvenience” caused by a Hibagon sighting.

It was an exceptional offer considering the starting monthly salary for a town government employee back then was 14,900 yen, Egi said.

Although the payments raised suspicions of bogus sightings, Egi personally knew some of the witnesses very well.

“They were above lying, I can tell you that,” he said.

By October 1974, the town office had received 29 reports about Hibagon appearing in the wild.

But then, the sightings completely stopped.

“Hibagon fever is over,” the town officially declared in June 1975, five years after the first sighting.

Hibagon was never caught, even on film. The creature’s true identity has remained wrapped in mystery.

“Hibagon is a symbol of our town,” said Egi, who still lives in the area.

“I’m blessed with six grandchildren. I believe Hibagon, too, is living peacefully somewhere deep in the mountains, surrounded by grandchildren,” he said.

Egi’s sentiment is reflected all around the Saijocho district.

A character resembling Hibagon is ubiquitous in such places as gas stations, bus stops and souvenir shops.

“The young generation may not be familiar with Hibagon at all, but Saijo is the town of Hibagon,” said Kazuo Yamaguchi, 49, who heads the nonprofit organization Saijo Sightseeing Association.

Yamaguchi was born and raised in Saijo. But he spent his high school and college days in Hiroshima city.

He was only an infant when Hibagon fever reached its peak, but he said he feels so proud of having Hibagon in his hometown.

In 2005, Saijo merged with other municipalities and became part of the city of Shobara.

At the end of June, 3,262 people lived in the Saijocho district, a 35 percent decrease from the population 20 years ago.

As part of revitalization efforts, Yamaguchi’s organization and the city government plan to host many events to mark the 50th anniversary of the first Hibagon sighting.

Tours to places where Hibagon was seen were on the agenda, but they were canceled because of the novel coronavirus pandemic.

Instead, Yamaguchi now plans to host an online tour in autumn to Hibagon-related locations and sightseeing spots. Egi will serve as a tour guide.

A commemorative publication that contains old newspaper articles and witness interviews is also expected to be released in fall.