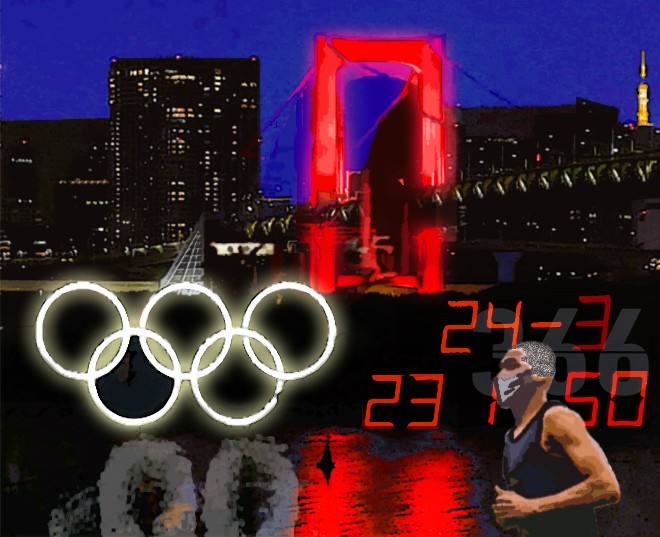 Tokyo
if only bird-watching were
an Olympic sport
--Meik Blottenberger (Hanover, Pennsylvania)

tennis courts
the back and forth
of goldfinches
--Kristen Lindquist (Camden, Maine)

a solid third
in the egg-and-spoon race
gold inside
--Helen Buckingham (Somerset, UK)

home workout--
the rocking chair moving
to and fro, to and fro…
--Rodica Stefan (Bucharest, Romania)

The haikuist cheered as a fellow countryman raced at Tokyo 1964. Karuna Nanda from Ceylon ran round the final two laps of the 10,000 meters race in last place. As the athlete trotted along, laughter from the stands gradually turned to applause and when he came sprinting to the finish line a roar rose from the arena to salute his perseverance and devotion to the participative spirit of the Olympics.

Pitt Buerken hoped to watch a game played by rolling metal balls at the Paris 2024 Olympics.

boule match
the clacking of bullets
deep into the night

Ewa Kajtoch needed to spend more time on the pitch in Krakow, Poland.

Empty pitch
the rolling ball misses
goal and the daisies

Satoru Kanematsu was nonplussed when Tokyo 2020 organizers postponed the opening ceremony; he was able to watch a different parade. Vasile Moldovan prefers Romanian online puzzle games however, he settled for a conventional hand of whist that requires players to win the exact number of tricks that they bid.

Marching ants
leader and rearguard
out of sight

postponed r games...
but they play cards
until daybreak

Scott Hundahl composed a poem as the sun rose over Arden Oaks in Sacramento, California. Ewa Kajtoch’s game was rained out.

Taofeek Ayeyemi sang, “the ants go marching one by one” in Lagos, Nigeria. John Hamley rounds out the song, “And they all go marching down to the ground” by taking us deep into the hollow earth under the New York City subway system.

ants kissing ants
as they march towards
a dead roach . . .

Take
the E train
to Pellucidar

Hamley rhetorically asked if the above is “a good haiku, or does that depend on whether you are a fan of Edgar Rice Burroughs” 1915 fantasy novel? Turn-of-the-20th-century fiction about boring holes for trains from New York to Japan led to engineering marvels such as the world’s longest undersea Seikan tunnel that connects Honshu and Hokkaido islands. A turn-of-this-century creative writing student at Hokusei Gakuen University in Sapporo, Yumi Sasaki shared an updated vision. Her classmate Aoi Nakagawa shared a similarly good haiku--perhaps considered as unbelievable science fiction just a few years ago.

touching the keyboard
many faces watch me
another long flight...

Away from his warm home in Kyiv, Ukraine, Serhiy Shpychenko was in no mood for the 1952 musical comedy “Singin’ in the Rain.” Louise Hopewell watched as a red rainstorm wreaked havoc in Melbourne, where “absolutely everything--windows, cars, streets-was coloured with red dust.”

after the fires
red dust on the wind
hailstorm

Attending the musical “Cats” in Malta, Francis Attard alluded to T.S. Eliot’s whimsical 1939 poetry book. Compare those cats to Nakagawa’s, in another of her takes on modern study methods.

a professor on my computer,
a cat sleeps on my lap...
the smell of fresh bread

Until a storm suddenly broke in Zagreb, Croatia, Slobodan Pupovac had been hoping to curl up in his favorite chair.

thunderstruck
a bristly cat
in the armchair

Startled by a knock at her door in Suginami ward in Tokyo, Junko Saeki explained that “at this time of year, young boys dance from door to door to bring good luck to the residents” which “gives a tremendous sense of achievement and sense of belonging to the boys.”

baseball glove
in a dark corner
the summer without

a summer
that never was--
holidays

Mark Gilbert watched a boy tug at a kite string overhead Nottingham, UK: fluttering kite something about a butterfly.

Eugeniusz Zacharski personified the season as a noun, rather than an adjective, to inform readers who owned the day in Radom, Poland. During a Buddhist funeral rite in Tokyo, Murasaki Sagano compared the ephemeral life of a lotus blossom to the deceased.

Lotus bloom
the short span of life
for him too

Venturing out to his favorite haunts in Osaka, Teiichi Suzuki heard that many barkeepers had closed down “because of depression.” John J. Dunphy suggested giving it a second thought in Alton, Illinois. Kanematsu concurred.

riverfront tavern
patrons stand at the bar
in wading boots

A wind-bell
as if second thought
starts to ring

The next issues of the Asahi Haikuist Network appear Aug. 7 and 21. Readers are invited to send haiku about where you self-isolate or hideaway, on a postcard to David McMurray at the International University of Kagoshima, Sakanoue 8-34-1, Kagoshima, 891-0197, Japan, or by e-mail to (mcmurray@fka.att.ne.jp).