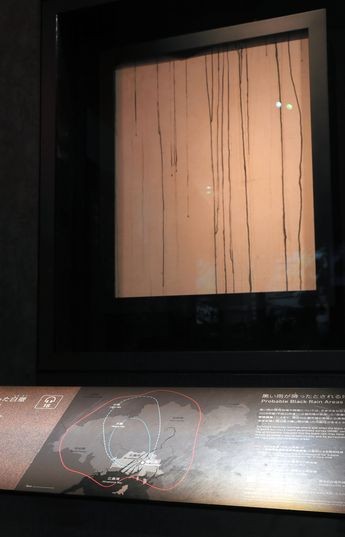 A white wall bearing marks of “black rain” that fell in Hiroshima soon after the atomic bombing on Aug. 6, 1945, is exhibited at the Hiroshima Peace Memorial Museum. (Asahi Shimbun file photo)

The falling rain is black and viscous and heavy like mud. The ominous precipitation drenches 20-year-old Yasuko while she is in a small boat on her way back to downtown Hiroshima. The black stains left by the rain just cannot be washed off, no matter how hard she tries.

Shortly after the city of Hiroshima was incinerated by an atomic bomb on Aug. 6, 1945, a most unusual rainfall occurred.

"The shafts of rain were as thick as fountain pens," Yasuko wrote in her diary. "It was midsummer, but it was so chilly it made me shiver."

On July 29, the Hiroshima District Court is to hand down its verdict on a group lawsuit instituted in 2015.

The plaintiffs, who at the time numbered about 80, sought to be officially recognized as hibakusha, A-bomb survivors, because they were exposed to the black rain 75 years ago and have suffered ever since from symptoms, which they claim were caused by radiation exposure.

Their main point of contention is that even though the rain fell across a broad area in and around the city, only the people who happened to be in the "heavy rain zone" were given special treatment.

But the plaintiffs were in the "light rain zone" and zones outside the recognized precipitation area.

"Fragments of tatami flooring and pens fell from the sky, and then the black rain came," read one passage from the depositions submitted to the court.

"The rain left black stains on my shirt," another passage read.

Since the suit was filed five years ago, more than 10 plaintiffs have died.

Back in 1976, the Japanese government set a boundary line between the "heavy rain" and "light rain" zones. Some Hiroshima residents immediately questioned the demarcation.

"On the other side of the river in front of my home, the rain that fell was deemed radioactive by the government, but the rain on my side was judged to be just ordinary rain," one resident complained.

The government's decision to draw that arbitrary line and stick to it is definitely not acceptable.

In the film, Yasuko appears to be quite healthy at first. But she soon starts displaying symptoms of radiation poisoning, one after another, and her hair falls out in thick clumps.

Surely, the terror depicted in that scene must have been exactly the reality faced by hibakusha.

The black rain lasted only a few hours. But 75 years after the end of World War II, people are still suffering.